A Regular Evening at the Terminus in Hills

Have you guys seen them? They are there, sometimes in the Railway Station not waiting for the toy train but just because it is their routine to sit on the bench of the station, sometimes at Terminus, sometimes in a group of three and sometimes only a couple. But they always hold one thing and that is the mighty newspaper. They have kept the knowledge and the memories of an era through this.

They experienced many problems which we, the generation of 90's and the present ones never had to face, they saw different teams playing soccer and winning cups, they have seen different people walking and having fun beneath the real vintage nature of Darjeeling hills, they have seen them jumping off the slow commander jeep and now the fast and the furious sumo vehicles, they have seen Shaktimaan trucks loaded with grit now becoming Mazda, and moreover they have seen the beautiful yet time taking road of NH55 destroyed, and also the construction of a beautiful Rohini Road connecting our Nepali culture with various cultures of the world. They saw the people of Tindharia losing their business profits in tears of wrath and agony, just because of the delay in the reconstruction of NH55 all thanks to the government and some money eating selfish civil contractors.

They saw the small houses being destroyed to be turned into Hotels and Tourist Lodges, the hotels which also take the share of polluting the hills which was known for its natural beauty. "There is no water in the hills.." I heard him saying. "All water is taken by hotels and we have to live in this scarcity." he added. I even asked one of them how he feels about the changing pattern in Hills and he replied with a face of despair and smile of melancholy that he feels lucky to be born and brought up in his beautiful motherland, the queen of hills, the pine trees, and fresh air but equally feels sad that he will have to die in the place of demonic structures, egocentric people, and declining moral values.

They saw different governments ruling and making fool out of the innocent ones, they even witnessed the torture over common people through guns, rapes and brutal killings of the smiling faces. They saw the netas wearing 'Dhaka topis' on their head and shouting out loud from the stage, "I'll give you your right or else I'll shoot myself." Forget our right, I guess their guns are even made in China that the suicidal promise didn't work. They have seen all the people coming out together in rallies of Fulpaati regardless of their caste and now they see them in the rallies of "Falaana jaati ko fulpaati." They saw boards being constructed, divided to be ruled, with motto of development for those who hoist the political flag in their respectable terraces. And now they are witnessing people changing one political party to another, and again coming to his home party just because of not receiving the share of profit. And in such shares' the demand of Gorkhaland, died.

They even saw the people of tea plantation working day and night to give the pleasure and aroma of tea to various classes of the society only to be neglected by them, as their one teaspoon of blood and a teapot of hard work seems to be completely diluted in the cup of tea itself. No one actually care about the tea estates.There is a huge storm in their tea cups. The old folks have also seen the owners and governments commenting on the death of tea workers due to "prolonged illness." and only 'They' know what amount the so called illness costs. One of them told me that the Central government did try to help but nothing worked due to the estate owners' ineptitude and greed and the state's apathy and the workers continued to suffer.

Coming back to them, yes, they didn't have that luxury which we are proud of. They believed in hard work, and smart work wasn't their way of living, and believe me, once you see their faces, you'll see that simultaneous ounce of pain and happiness.

From bell bottoms to torn denims, they are living with the changes in the society with a smile and that newspaper. 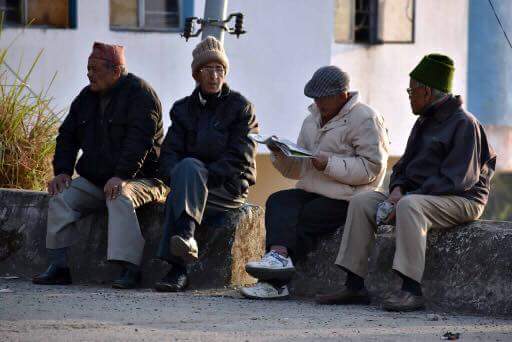