- May 26, 2017
A court here has rejected the anticipatory bail pleas of three doctors against whom police filed a case under a new law dealing with medical negligence following the death of a woman at a private nursing home in Jalpaiguri last month.
"The Jalpaiguri district and sessions court held an elaborate hearing of the anticipatory bail petitions of three doctors, a nurse, a technician and a managerial employee of a private hospital. The court rejected the bail pleas of all, except the nurse, on May 24 as it felt that there was negligence that led to the patient's death," said Somnath Pal, the public prosecutor of the court.
He said the court felt that the nurse was not as responsible as the other accused for the patient's death.
The Kotwali police had registered the case under Sections 29 (2) and 30 of the West Bengal Clinical Establishments (Registration, Regulation and Transparency) Act, 2017, and Section 304 of the IPC against the six persons on the basis of a report submitted by the district health department.
The contents of the 67 page report are not known. It was drafted by an investigation team constituted by the health department following a complaint filed by Gopal Chhetri, a retired police sub-inspector. His wife, Mina, 62, had died at Marina Medical Centre at Babupara in the town on April 11.
The resident of Racecoursepara here had been admitted to the hospital on April 7 with anaemia.
Later, she developed breathing problems and was put on ventilator.
Gopal alleged that the ventilator did not work properly and the nursing home authorities did not take prompt steps to replace the equipment or other measures to improve the patient's condition.
The accused doctors are P.K. Burma (the owner of the nursing home), Shyamsundar Das and Kumar Atanu.
None of the accused persons could be contacted.
Today, a group of doctors demonstrated before the office of the chief medical officer of health to protest against the police case.
Jagannath Sarkar, the CMOH, said: "We had filed the report with the district administration which forwarded the same to the police. It is up to the police to decide under which law they would bring charges against the accused."
Telegraph
In pic: Marina Medical Centre in Jalpaiguri. (Biplab Basak) 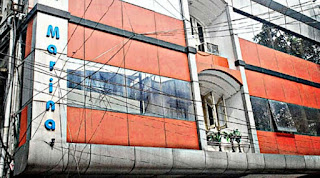