The Enforcement Directorate (ED) is conducting a raid at the residence of Bengal IAS officer Godala Kiran Kumar. A team of ED officials reached Kumar's apartment at the upscale Rosedale Garden housing complex in Kolkata's New Town area this morning.

The 2005 batch Indian Administrative Service (IAS) officer was earlier arrested on graft charges by the West Bengal CID in July 2015. The former District Magistrate of Malda, Kumar was serving as a Joint Secretary in the State Agriculture department during that time.

Kumar had been charged with siphoning off funds from the Siliguri-Jalpaiguri Development Authority (SJDA) while he was the CEO of the body. The ED is probing the SJDA scam which is reported to be worth Rs 200 crore. Kumar, who originally hails from Andhra Pradesh was named in eight FIRs as part of the SJDA scam.

The Mamata Banerjee government had sent Kumar on compulsory waiting after being accused of graft charges. However, he was reinstated last year as a Joint Secretary with the Statistics department. 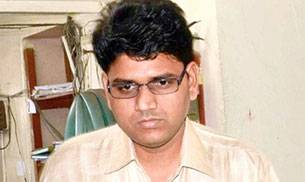