An unidentified man who had fallen from a moving trekker and suffered serious injuries last night lay unattended on NH34 at Barduari near here for around 12 hours, triggering allegations that police had refused to take him to hospital.

The man, who was unconscious and looked aged above 50, was admitted to the district hospital here by the police this morning.

Uttam Das, an eyewitness, said the trekker didn't stop even after one of the passengers had fallen around 11pm yesterday. "He was unconscious. I was standing alone on the highway and feeling confused. After some time, I found a vehicle of Raiganj police station. I approached the policemen seated inside and narrated the accident. The policemen, however, said they did not have enough space in their vehicle to take the man to the hospital. They left after some time," said Das.

Das stood there for some time but could not find anybody who could take the injured man to the hospital. "I was feeling nervous and finding no other alternative, I left for home after sometime," he said.

The man lay on the road throughout the night. Several vehicles slowed down so that the man bleeding profusely was not hit and then sped away.

This morning, local people raised a blockade on the highway in protest against the alleged apathy of the police last night. The protesters said the police had been informed about the accident several times but there was no response.

The Raiganj police reached the spot to clear the blockade that had led to a halt to traffic this morning.

The police took him to the district hospital around 11am. Doctors said the injuries were serious and he had lost a lot of blood. 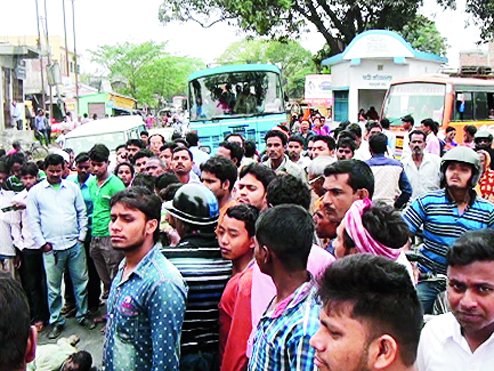