The Gorkha Janmukti Morcha is pitching the coming hill municipal elections as a "Gorkhaland versus Bengal" battle.

The Morcha has already sent to print posters which read: "Gorkhaland versus Bengal".

A senior Morcha leader said: "This is a crucial election. Opposition parties might have many things to say but the fact is that if they, especially the Trinamul Congress, win the election, we believe a wrong message might be conveyed to the Centre. That is why we want to put it before the public that even this election, which is at the local level, is a Gorkhaland versus Bengal battle."

Gorkhaland has always been the Morcha's theme in previous elections but never before had the party pitched a direct battle on the lines it has thought for the coming polls.

One of the posters the Morcha has sent to print roughly translates: "Gorkhaland versus Bengal, to uproot Bengal's hegemony and to secure our future, let us all vote for the GJM candidate."

The poster is written in Nepali.

The Morcha leader said: "Our point will be that every vote for Trinamul will be for Bengal."

Morcha sources said its all 32 candidates in Darjeeling were today asked to be dressed in traditional attire for a photo shoot that could be used in the campaign posters.

The "Gorkhaland versus Bengal" slogan might sound attractive in the three hill municipalities of Darjeeling, Kurseong and Kalimpong.

In Mirik, Trinamul has an advantage because of Mamata Banerjee's announcement of a survey to grant land rights to its residents. 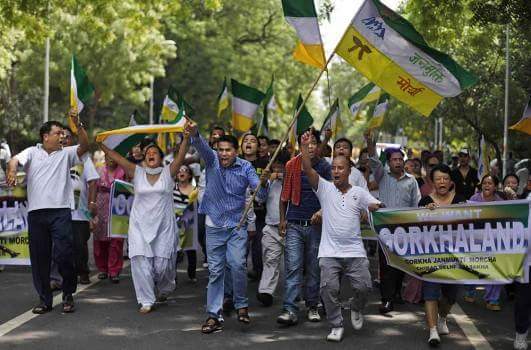