Day 1 started with DisAsm (Disassembly and Assembly of vehicle in less than 60 minutes), 4ze racing was declared as the fastest team to complete the event in 58.47 minutes. The next event was Business Plan presentation, here the team has to present a market strategy to mass produce the car and pitch their potential to investors. The team secured 3rd position in the event.

Day 2 was full of ups and downs. It started with the Technical Inspection of the car. Here again 4ze Racing was the first to clear the Inspection and get a green signal to run the car on the track. Following the Technical Inspection were the Dynamic Events, which were Acceleration, Skidpad and Autocross. The team completed its Acceleration run of 30 meters in 4.5 seconds, Skidpad in 21.84 seconds and Autocross in 33.63 seconds. The team secured 1st position in all the events.

Day 3 was exponentially challenging. All the eligible teams were expected to complete a 28km long Endurance run. This event is considered the toughest even internationally, as all aspects of the car are tested to their limit. Team Smokin Axle's and 4ze Racing were the only two teams who were able complete the course of endurance, which in itself is commendable. 4ze Racing would like to thank and congratulate all the teams for their participation and contribution to make the event a success. 4ze Racing is now the defending Winner and Champion of Formula Green 2017 organized by ISNEE.

A small writeup by Harsh. We wish him a great career and life ahead.

This is Harsh Agarwal, son of Mr Binod & Mrs. Naina Agarwal and the team captain of 4ze Racing.
I belong to the city of Kurseong(Darjeeling), where my father works as a Tax Consultant and Account(L.I.C).
Currently i am in the final year of my B.Tech program in automobile engineering at SRM University Chennai .

My team "4ze Racing" is a Formula Electric Racing team representing SRM University. Here a group of around 30 under graduate students design, fabricate, and test electric formula race cars.These race cars are buily every year and showcased in competitions like FSAE and Formula Green.
This year we geared up for the Formula green event organised by ISNEE(Indian Society of New Era Engineers)which was held from 29-31st March. Representatives from 9 different universities of India had participated in the event. After all the long nights and tough races, at the end of the three days, we were crowned the National Champions! A feat our team has worked hard for, and every member truly deserved.

All I can tell you about me is that my passion for cars extends further than where feet can reach, so i chose wheels instead.  Everyone knows the adrenaline rush in racing a car, but only a few get to feel the rush of building one. From the core to the final touches, every car we made has been an adventure on its own. The late nights and long hours were all dedicated to this one goal, and it feels amazing to achieve it. 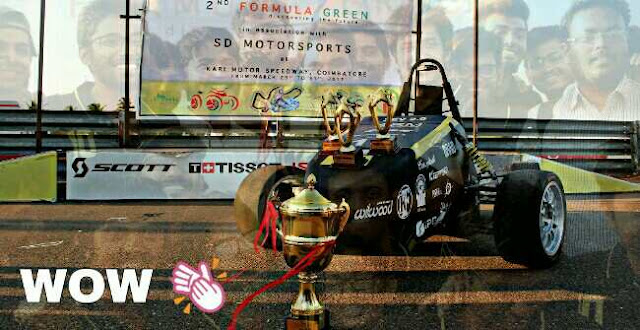