The Yuva Ekai had been staging what it called "repentance dharna" at the same venue since April 31, a day after Gurung remarked rather disparagingly on the contribution of the two leaders to the community and its cause.

He had said but for the mistakes committed by them, the Gorkhas wouldn't have been reduced to "begging" for a state of their own even todday.

The Morcha president had on Tuesday sought to calm the controversy by claiming that his statements had been misinterpreted by the media and his political rivals even though the footage of his April 30 speech had been circulated in the social media.

Damber Singh and Ari Bahadur had represented the Gorkhas in the Indian Constituent Assembly at different times in the 1940s. While Damber Singh was the founder president of All India Gorkha League, his cousin Ari Bahadur was its member. Both were leaders who even today enjoy respect in the larger Gorkha community.

Amir Basnet, the secretary of the Yuva Ekai, accused Gurung of "resorting to lies" instead of tendering an apology for hurting the sentiments of the Gorkhas spread across the country.

"It is unfortunate that Gurung, instead of repenting, is resorting to lies. But that is his nature. People have seen the video (of his remarks) that has gone viral in the social media. We, on our part, will end our repentance at the end of our 48-hour hunger strike on Friday by paying tribute to Damber Singh, whose 69th death anniversary falls on the day, and Ari Bahadur, both of whom are the pride of the Gorkhas," he said.

It is not just the Morcha's political rivals who are unwilling to buy Gurung's clarification.

Even the families of Damber Singh and Ari Bahadur have said that Gurung's feeble attempt at clarifying the remarks does not pass muster with them, and he, instead, should have apologised.

Udai Gurung, Ari Bahadur's, said his family would return the citation awarded posthumously to his father by the GTA to protest the Morcha chief's remarks. 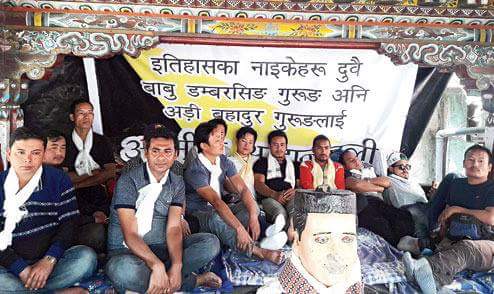