A car driver here has opened a "cloth bank" at his house to distribute garments among poor people and those living in closed tea gardens of Alipurduar and Jalpaiguri.

At the cloth bank, Talukdar keeps a stock of old and new garments.

Talukdar said: "My father was a tailor and it was very tough for him to run the family as we were five brothers. He somehow managed to make ends meet. I had to leave school after Class IV because of poverty. Few years ago, I saw people wearing torn clothes in closed tea gardens of Alipurduar and Jalpaiguri, at railway stations and bus stands. It was then I started collecting old clothes from acquaintances and other people from across north Bengal and used to distribute them to those in need."

"After I opened the cloth bank, some of my close associates and other people who came to know about it started donating new as well as old clothes on their own. In the past three years, I have distributed clothes among people in Bandapani, Ramjhora, Red Bank, Kathalguri, Dimdima and other closed tea plantations. I always carry a bag of old clothes in my car and hand over it to anyone in need," he added.

Bikash Roy, a clerk at closed Dheklapara Tea Estate, seeing the noble work of Talukdar, gave him his unused two-wheeler that helped him visit different remote areas for distributing garments.

Talukdar who lost his father because of lack of treatment also wants to provide food, clothes and accommodation to old destitute people.

He has brought a 65-year-old-man Budhu Oraon at his home in Grassmore here and is providing him with all the basic facilities. Talukdar had found Oraon crawling along the road.

"I lost my father because we did not have enough money to treat his paralysis. But now I help poor patients and take them to a doctor who does not charge fees from them," Talukdar said.

In 2015, he bought a car and uses it for commercial purposes. He himself drives the car.

"I earn around Rs 23,000 a month of which I deposit Rs 15,000 as the installment against the car loan. I can earn more but a good amount of time is spent doing welfare work," Talukdar said.

Talukdar lives with wife Mamoni Talukdar, sons Alamgir and Sohel. "My family members extend all kind of support to me. Both my sons do not want to take private tuitions and want me to use money for some social cause. I have planned to construct a big room at my house where I plan to provide shelter to at least 20 old destitute people with all basic amenities," he said.

Talukdar has appealed to gram panchayat members to donate old clothes to his cloth bank and had also recently visited the adjoining areas of Alipurduar town requesting people to donate garments. Last week, he had distributed clothes at Bundapani and Red Bank tea estates. 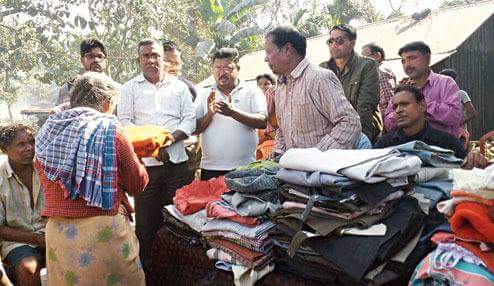