Forensic experts arrived in Darjeeling on Wednesday to investigate the cause of a mysterious explosion that had rocked Bhutia Bustee in Darjeeling on March 31. The blast had occurred at around 5 pm on Friday near the Young Man Buddhist Association school at Bhutia Bustee, below the Darjeeling Chowrasta. Such was the intensity of the blast that the grounds shook and people residing in the surrounding areas thought it was an earthquake. The blast took place at the house of one Keshar Rai. He is one of the accused in the All India Gorkha League (AIGL)'s leader Madan Tamang's assassination case. He is presently out on bail. Based on a complaint lodged by the Fire Brigade, police had initiated a case. The police and fire brigade personnel had found the gas cylinders intact. Electric wirings were also in good condition. They could not ascertain the cause of the explosion. "Hence, we had called in the forensic experts," stated Amit P Javalgi, Superintendent of Police, Darjeeling. Accompanied by senior cops, the two-member team from the State Forensic Science Laboratory, Belgachia, Kolkata, arrived at the spot at around 3:30 pm on Wednesday. The house had been cordoned off and sealed. The team, after thorough examination, took with them samples of the debris for examination in Kolkata. "Possibility of LPG being the source of the explosion cannot be ruled out," stated Dr Debasish Saha, forensic expert. "Preliminary investigation points towards an LPG explosion from a leaking gas cylinder. However, we can only confirm after the samples are tested in the lab. The report will be ready in the next 15 days," added Dr N Ghatak, also from the forensic lab. Three gas cylinders were removed from the premises. The forensic experts also spoke to the neighbours. 11-year-old Tshering Lucky and 56-year-old Hemlata Subba who live in nearby houses and were present in the vicinity during the blast were critically injured. They are admitted at the North Bengal Medical College and Hospital with grievous burn injuries. "The house was empty during the blast. Tshering Lucky, who is related to the owners of the house, had gone to change her clothes as she was going out for tuitions. That is the time when the blast occurred. Hemlata Subba, who lives opposite to the house, was washing clothes. Hearing Lucky scream, she rushed to see what had happened and she got injured too," said Akhilesh Thapa, a neighbour.  Hearing the loud bang, the shattering of window panes, neighbours rushed to the spot. "We found my mother crawling on the floor. Her clothes were all burnt," said Arpana Gurung, daughter of Hemlata Subba.  The neighbours then had rushed the two to the Darjeeling Sadar Hospital from where they were referred to the North Bengal Medical College and Hospital, near Siliguri. Akhilesh Thapa remarked that there was an acrid smell hanging heavy in the air. "For a long time many people living in the neighborhood complained of dizziness and nausea," complained Thapa.

Correction: The small girl is admitted at Eden Hospital in Darjeeling and the lady is at Shanti Nursing Home in Siliguri. 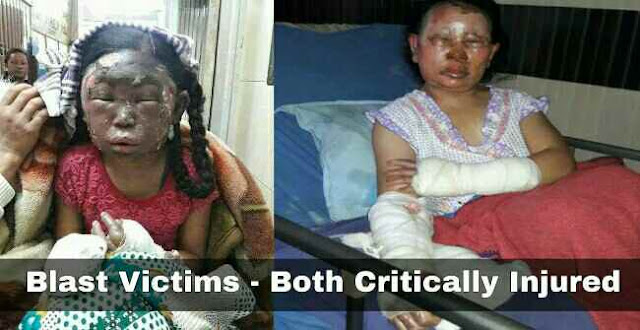