An 11-year-old girl and a neighbour were injured yesterday afternoon in an explosion in the Darjeeling house of an accused in the murder of Akhil Bharatiya Gorkha League leader Madan Tamang.

The house is located just below the mall (Chourasta) in Bhutia bustee.

The accused, Gorkha Janmukti Morcha worker Keshar Rai, was not at home because Calcutta High Court has directed many of the 54 people named in the chargesheet in the 2010 murder case not to enter Darjeeling.

The injured were identified as Lucky Bhutia, an 11-year-old niece of Rai, and Hemlata Subba, 55, a neighbour.

"Lucky had got a pungent smell around 4.30pm and called Hemlata. Hemlata tried to check the gas cylinder while Lucky went to another room. Suddenly, there was an explosion and the two suffered injuries," a police source said.

Several doors and windows of the two-storey house were ripped off their hinges after the explosion. The windowpanes of a house 50 feet away were shattered.

Amit P. Javalgi, the Darjeeling police chief, said: "We have called forensic experts after the fire department gave us a report stating that the blast was caused by anything but not a gas cylinder." 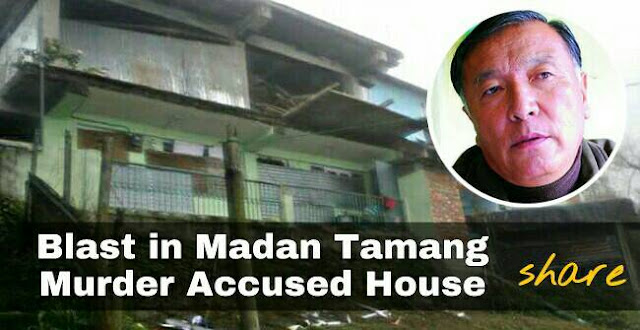