Ever since 2011, Chief Minister Mamata Banerjee has been constantly working to get Bengal back to its earlier glory and has been undertaking several projects to ensure the same. It should also be mentioned that the officers engaged in the same are also taking their work seriously and in yet another such instance, the Panchayat and Rural Development Department has taken up a unique scheme to restore the springs in the Hills which have dried up. This is for the first time when such a project has been taken up. Chief Minister Mamata Banerjee had always been giving emphasis on the development of tourism in North Bengal especially in Darjeeling. She visited the area several times in the past six years and urged the state government officials to come up with schemes to develop the area. The restoration of the springs is one such project taken up as a part of the beautification programme. Work to restore 30 odd springs in Darjeeling under the Spring Shed Development project have started and 300 springs which have dried up have been identified and will be restored in phases. The estimated time to complete the projects is three years. A survey conducted by the Panchayat and Rural Development department revealed that over 300 springs in the Hills have dried up over the years. During the Left Front regime of three decades, the state government did not pay any attention to the natural springs.  One after the other they dried up and the Hill, particularly Darjeeling, lost much of its charm.  The mountains, springs and tall trees are the chief attraction of Darjeeling. In the writings of Rabindranath Tagore, who had visited the Hills several times, there are reference to the springs, their beauty and continuous murmuring sounds of the water. To restore the natural springs, conserve water along with aforestation, under the Mahatma Gandhi National Rural Employment Guarantee Act (MGNREGA) scheme, the Panchayat and Rural Development department has carried out massive water shed conservation schemes successfully throughout the state. The work to restore 30 springs as a pilot project in the Hills is being carried out in full swing. Massive afforestation work has been taken up and water conservation will be done at the source of the spring.  Once the process is complete, the springs will get back their natural flow and will start functioning again. Once the springs start flowing, the Hills will get back its original beauty. This will attract tourists all over the world. "If we read the books written by the district magistrates who had been posted in the Hills between the 1930s to 1960s or by travelers who had visited the area during this period, we can have an idea of the beauty of the Hills in North Bengal and why the name Queen of the Himalayas was given to Darjeeling by the British." 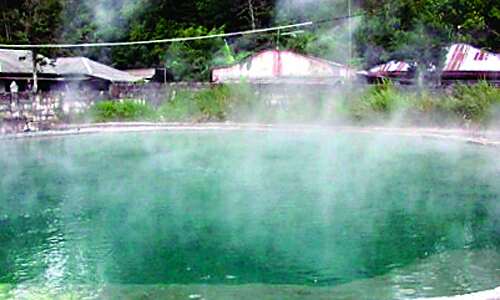