They say practise what you preach. A police constable at Nadia in West Bengal learnt what it actually means.

A group of village youths yesterday caught the police constable riding a motorcycle without helmet at the same spot where cops have been fining bikers for the offence as part of the chief minister's Safe Drive, Save Life intiative.

A team from Krishnaganj police station had to eventually fine the constable Rs 100 before the villagers allowed him to go.

Around 50 youths from Chandannagar village yesterday gathered at the spot in Krishnaganj where the police had been detaining and fining youths riding bikes without helmets for the past few days.

Constable Bishu Dey, who was returning home after completing his duty at a higher secondary exam centre, was stopped by the group of villagers who asked him why he was riding a bike without a helmet.

Dey tried to convince the youths, saying he was busy in exam duty and had forgotten to bring the helmet in rush. But the villagers were relentless.

The youths insisted that Dey and the civic police volunteer riding pillion would be released only after the constable was fined and given a receipt by the cops from the local police station.

"We told the constable to pay up, just like we have to. We are never spared. We called the police from Krishnaganj police station and kept the constable detained until senior officers arrived," said Bidyut Das, one of the villagers.

A little later, Krishnaganj officer in charge Mukunda Bhattacharya arrived at the spot and requested that the constable be allowed to go, but to no avail.

"Bhattacharya and other senior officers admonished Bishu Dey for riding without a helmet, but requested us to let him go without the fine. That was unacceptable. There has to be equality in treating law violation," said Bimal Biswas, another villager.

"The state government's initiative to save lives on roads is good, but it is for everyone. The police cannot be an exception," Biswas added.

The constable was eventually allowed to go, but only after he had paid a fine of Rs 100 and was issued a challan by the officers.

"Yes, we fined him on the spot for riding the bike without helmet and told him to show the documents of the bike. We do the same with any citizen," officer in charge Bhattacharya said.

Local panchayat member Apurba Biswas said the villagers were desperate to catch any policeman violating the law as the cops had been allegedly harassing bikers in the name of routine checks.

"They found an opportunity today and gave the law-enforcer a taste of his own medicine," Biswas said.

Sources said the anger of the villagers was the fallout of an incident on Sunday night when two youths without helmets were detained and allegedly harassed by some policemen on their way to a hospital to see a patient.

"Nobody is beyond the law. Cops should be more careful and exemplary in conduct before the people," said Nadia police chief Sheeshram Jhanjharia 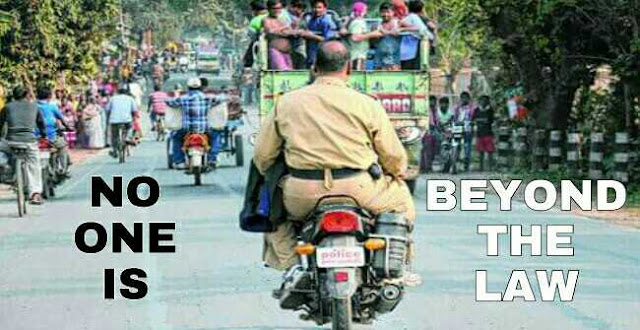