Tourism stakeholders have opposed the construction of a tourist lodge by the state government at Tiger Hill and instead sought an extensive plantation drive in the area.

The West Bengal Tourism Development Corporation Limited has undertaken a Rs 40 crore project to build four cottages, 20 double bedrooms and a 20-bed dormitory at Tiger Hill, situated 14km from here and at an altitude of about 8000ft.

Pradip Lama, the secretary of the Darjeeling Association of Travel Agents, today said: "We oppose the project on various grounds. Instead of building a tourist lodge for the convenience of few tourists who can watch the sunrise from their balconies, the government should increase the forest cover in the area as this is what most tourists want to see."

Travel agents said the government's decision to come up with a concrete structure was unwelcome at a time green cover was fast vanishing from the hill town.

"At Tiger Hill, the government should start extensive plantation of rhododendron and other medicinal plants, which have gone extinct," said Lama.

The association is also concerned that the construction at Tiger Hill will have a long term effect on the water supply to Darjeeling town.

Swaraj Thapa of the Gorkha Janmukti Morcha's Study Forum had alleged that the project had been launched without necessary clearances and the party would move the National Green Tribunal against the construction.

Sunil Agarwal, the joint director (tourism) of north Bengal, said that all necessary permissions had been obtained for the project.

N.B.Khawsh, the general secretary of Trinamul (hills), said: "Swaraj Thapa is pointing finger at the government but is silent on the construction being undertaken by the GTA atop Tiger Hill."

Thapa, however, said: "The construction (of a sunrise viewing point) by the GTA is on a site where such a facility had already existed. The government, on the other hand, is building a new structure." 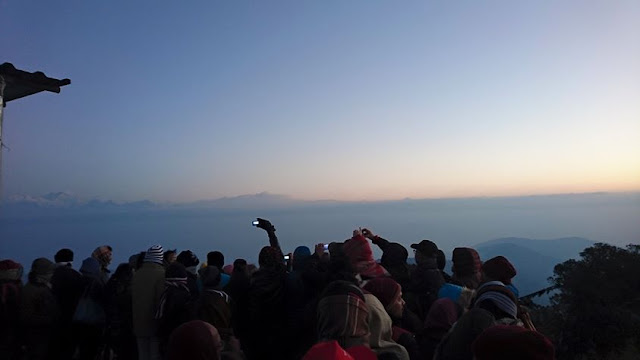