A class 9 student of Rhenock Senior Secondary School named James Lohar of Rhenock Kyongsa in East Sikkim was found dead near Middle Aritar on 4th March 2017. He hanged himself in school uniform after the alleged torture by School Principal and Staff.

It has been reported that on 3rd March, James Lohar and his friend Bipesh Chettri were allegedly caught with Marijuna (Ganja) during regular checking at assembly. They were allegedly beaten up by principal and school staff in assembly and were told to kneel down. Guardian of Bipesh Cettri was informed by school authority but they did not contact Guardian of James Lohar. Principal allegedly threatened both students to expel from the school. After a while both students ran away from assembly ground where principal had given them punishment. School authority did not took any step to search these children. Both student's parents search their respective ward for the whole day and night but next day i.e on 4th march Bipesh Chettri was recovered from nearby place. Bipesh informed to Rhenock Police that both slept at paralko maj [field grass] during night time. During the night, James left Bipesh alone saying that he is going for toilet. Bipesh waited his friend whole night and also searched him but was not able to find him. One of the villager found Bipesh on the way  and he was taken to police station. During investigation, James's body was found hanging on a tree nearby where they had spend night together. During the missing period, James mother reached school to query about her son. Principal of school allegedly threatened her to expel her son from the school and told her to bring her son next day. But on next day, she found her son dead.

Public of Rhenock tried to protest against the Principal during the funeral of James on Saturday but Rhenock Police controlled the situation. Mother of James, Students and local people will protest today, it is informed. 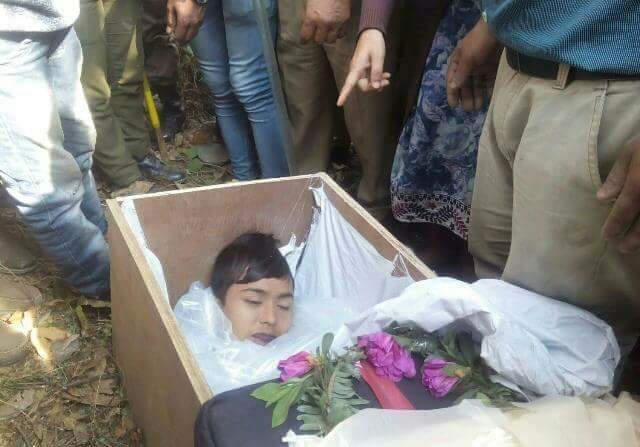