Based on a complaint, the Police on Friday arrested one trader from Kolkata's Karaya area for allegedly selling 'plastic' made eggs to his customers, officials said.

According to reports, a middle-aged woman, Anita Kumar, lodged a complaint at Karaya Police Station against a local shopkeeper alleging that the man sold her artificial eggs, which were dangerous for health.

After starting probe into the matter, city police's enforcement branch on Thursday late evening detained the accused trader, Shamim Ansari, and after hour-long interrogation, he was arrested on Friday morning.

An senior official of Kolkata Police told IBNS that fraud and criminal conspiracy charges have been slapped on Shamim Ansari.

However, arrested seller of 'plastic' eggs was produced in a local court at Alipore on Friday and was sent to police custody for four days.

Meanwhile, understanding the importance of the matter, Kolkata Mayor Shovan Chatterjee has ordered his officials to investigate the issue and take necessary legal steps against the persons, involved in selling artificial eggs, and to trace out if there is any 'plastic' egg manufacturing unit in the city limits.

"During the raid, we seized 3 crates of suspected eggs and have sent those for tests," Atin Ghosh said.

Meanwhile, Aparajita Das, a housewife from Canning in Kolkata's neighbouring South 24 Parganas district, claimed that plastic eggs were sold to her as she realized it while making omlet.

The woman, however, has informed local administration and an inquiry has been started into the matter, as an official said.

How to identify artificial 'plastic' made eggs:

According to the China Hush (www.chinahush.com), a website in mainland China where fake eggs are believed to have first originated, a person could distinguish artificial plastic eggs from original chicken eggs by using these seven methods:

1. After cracking the fake egg, the white and yolk will mix together quickly.
2. Fake eggs have slightly shinier shells than real ones.
3. The shells of the fake eggs feel slightly rougher.
4. You will hear sloshing sounds when you shake a fake egg as liquid will flow from the solid agent.
5. Real eggs smell like raw meat.
6. Tapping a real egg lightly will generate a crisp sound when compared to a fake egg.
7. When frying a fake egg, the yolk will spread without being touched. 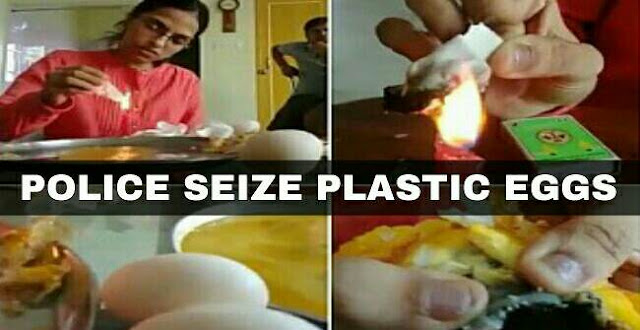