The Supreme Court yesterday refused to stay Calcutta High Court's order for a CBI probe into the Narada payoffs case, and sought an "unconditional apology" from the Bengal government for accusing the high court of "bias".

Faced with the court's ire, the state government withdrew its appeal against the high court's March 17 order.

By then, the court had already rejected similar appeals from Trinamul politicians Subhendu Adhikari and Saugata Roy, who wanted the probe transferred to an apex court-monitored special investigation team (SIT), and the case shifted to another high court bench.

The three-judge bench, headed by Chief Justice J.S. Khehar, however, extended by a month the 72-hour deadline the high court had set the CBI to complete a preliminary inquiry.

It also directed the agency "not to be weighed down" by the stinging observations the high court had made in paragraphs "65 to 68" of its judgment.

"The judgment is positive and we welcome it," chief minister Mamata Banerjee said, without elaborating, while leaving Nabanna this evening.

Despite the embarrassing withdrawal of the petition and the need to tender an apology, Bengal government sources tried to put up a brave face.

"We have the liberty to move court if we are not satisfied with the preliminary report of the CBI," a source said.

The case deals with tapes that show images resembling several Trinamul politicians accepting cash from a man posing as an agent of a company keen to set up projects in Bengal.

The Bengal government had asked that its appeal be heard separately from the petitions by Adhikari and Roy. Towards the end of the day's hearing, the state requested a Wednesday hearing.

Senior counsel Harish Salve, representing some of the litigants whose public interest pleas had led to the high court order, immediately rose to assert that the state's special leave petition made serious allegations against the high court.

He read out from the petition: "Findings of the high court are perverse, done with a pre-conditioned mind. High court has developed a bias. High court has transgressed all constitutional norms and made unwarranted comments."

Before the bench, which included Justices D.Y. Chandrachud and Sanjay Kishan Kaul, could comment, the state's standing counsel offered to withdraw the appeal.

"You want to withdraw it? You withdraw it and tender an unconditional apology," Justice Khehar said. The state is expected to tender a written apology at a later date.

The bench acknowledged the case was "political" as it involved political personalities, but felt that taking the investigation off the CBI's hands would be "demeaning" for the agency. "It's demeaning to say 'no CBI'," Justice Khehar said.

He said transferring the case to the CBI from the state police was justified as Bengal's advocate-general had given a clean chit to the accused.

"If the state advocate-general says no cognisance can be taken, how can you give it to the state police?" he asked. In a lighter vein, he said that if Sibal didn't want a CBI probe, the investigation could be transferred to (BJP-ruled) Uttar Pradesh.

"Why not (Congress-ruled) Punjab?" Sibal shot back.

Right at the start, Justice Khehar had said the high court was justified in ordering the CBI investigation as a forensic probe had indicated that the tapes were genuine.

Second, he noted, none of the respondents had disputed their presence in the video.

Sibal contested this: "I have disputed it. Video footage is not seen by the high court."

Justice Khehar said: "This clipping was telecast by a number of stations. Who is there on the clipping everybody knew."

Sibal argued that of the three crucial items collected by the forensic lab, the data could be recovered only from the pen drive and not the laptop or iPhone.

Since the pen drive was a secondary piece of evidence, it could not be treated as admissible evidence in terms of a Supreme Court judgment in the Anwar P.V. vs P.K. Basheer case in 2012, he said.

But Justice Khehar said: "If you retrieve data from a pen drive, you can't tamper. There is no way you can tamper with an electronic record."

Sibal said that according to Section 65B of the Indian Evidence Act, if the original material from the iPhone could not be recovered, no reliance could be placed on secondary material.

Further, he said, a writ petition had been filed in the case directly before the high court instead of an FIR.

Justice Chandrachud, however, said the petitioners had been forced to move the high court because the state police were not registering an FIR.

Justice Khehar said the law did not distinguish between primary and secondary evidence.

"It's a very important issue. It has far-reaching consequences. We are not in a hurry. We are prepared to hear you calmly," Justice Khehar said.

Sibal and Singhvi argued that the allegations in the video related to the Prevention of Corruption Act, under which a probe can be started only when there is a demand for a bribe.

In the Narada case, there was no such demand, he said. If at all there are any allegations, they should be probed under the Income Tax Act, he argued.

Sibal argued that allowing the NDA government to unleash the CBI on a non-NDA government would undermine the country's federal structure.

"Why send it to CBI? We know how independent the CBI is. Why is it that for two years nothing happened but now it is happening?" he said, alluding to how the videos were purportedly shot in 2014 but were made public only before the Bengal elections of 2016.

The bench, however, said that journalist Samuel Mathews, who had carried out the purported sting, had initially wanted Tehelka magazine to publish it. He put the videos on the website only after the magazine refused.

Justice Khehar said the court was apprehensive of the threat perception to Mathews. "We fear for this journalist. Imagine what this person must be going through?" he said.

Singhvi said that even his clients wanted adequate protection for Mathews as, if anything happened to him, the blame might fall on them.

"We should be afraid if something happens to him," he remarked.

Singhvi told the court that two of the petitioners before the high court belonged to Opposition parties in Bengal: Brijesh Jha to the BJP and Amitava Chakraborty to the Congress. Therefore, he said, the probe should be transferred to an SIT. 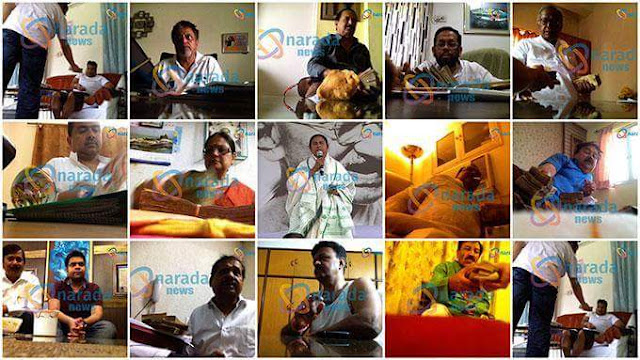