Gangtok, March 9: (IPR) The Producer of Purple Pebble Pictures Dr Madhu Chopra and the entire production team of the Sikkimese film ‘Pahuna’ and the members of the cast met and interacted with Minister Tourism Mr Ugen T. Gyatso and Minister IPR Mr A.K. Ghatani  today. Leading actress Priyanka Chopra is the co-producer of the film with her mother Dr. Madhu Chopra. The Nepali film is being shot entirely in Sikkim and has local cast. The film is being produced in association with the Department of Tourism & Civil Aviation, Government of Sikkim.

Later at the press conference, Dr. Madhu Chopra heaped praises on the State of Sikkim and its people. She stated that Sikkim has great potential as a film locale and should be explored by film makers. The place has talented artists who should be exposed to the medium of films, she added. “Sikkim should be showcased not just as a beautiful place, but also an active and vibrant place with talented resources. I would certainly like to come here again for more projects in future”, stated Dr Chopra. She thanked the Government of Sikkim and the concerned departments for the support extended in making the film a reality.
CEO, Children’s Film Society, India, Mr Shravan Kumar, who is in the state especially for the press conference, stated that Sikkim is a lovely microcosm of beauty that India represents. He stated that the North East Film Culture Revolution has begun from today with the first feature film being produced in Sikkim. He stressed on the importance of film as a strong medium to tell stories about our diverse cultures. He also shared his plans to hold an International Children’s Film Festival in Sikkim in near future, in collaboration with the Government of Sikkim. It will be the first International Film Festival to be organised in the entire North East region, and will open a new chapter for Sikkim as a potential film shooting destination, he said.

Secretary Tourism & Civil Aviation Department Mr C. Zangpo in his address stated that the State Government has a policy to promote and encourage filmmakers to explore the innate beauty of the State, and in the process hone up local talent and generate employment opportunities. He stated that Sikkim has always strived towards responsible tourism. He thanked the entire team from Purble Pebble Pictures and expressed hope that the upcoming film would help share the beauty of Sikkim with the rest of the world.

Meanwhile, Director of the film ‘Pahuna’ Pakhi Tyrewala expressed her gratitude to the Government and the people of Sikkim for extending all the support during the period of the shooting. “The journey started last year and I am totally in love with Sikkim. The support we have got from the local people during filming has been amazing,” she stated.

The film has two Sikkimese children Ishika Gurung and Anmol Limboo in lead roles. It was informed that the shooting of the film would be over by the first week of April.

The programme also had the presence of Special Secretary, IPR Department, Ms Namrata Thapa, and officers of Tourism & CA Department. 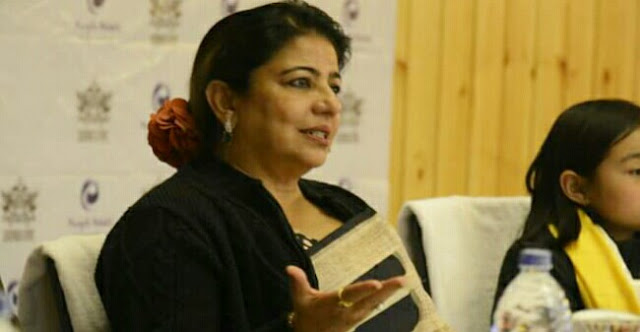