India was once a center of human skeleton export But the trade was banned in 1985.

Police have arrested eight suspected bone smugglers in the state of West Bengal after 365 bones were discovered in a village.

The bones, which were discovered in Burdwan district, are believed to have been taken from decomposing bodies found in the state's rivers, according to Ajay Sharma, the state's deputy police chief.

"The bones had been cleaned with hydrogen peroxide for sale locally to doctors and medical colleges," he told CNN.

In 1985, the Indian government outlawed the export of human remains.

That move came on the back of pressure from human rights groups, which deemed the trade unethical, according to Indian media.

The decision forced many companies,such as US-based Kilgore International, to switch to manufacturing and selling plastic skeletons.

Prior to the ban, according to Scott Carney, author of "The Red Market: On the Trail of the World's Organ Brokers," India was the leading source of human skeletons used in laboratories and medical colleges across the globe.

The 1985 ban didn't bring an end to the trade in human corpses however. Instead, a black market began to thrive with West Bengal right at the center, according to a retired senior police officer who didn't want to be identified.

The only legal way to obtain a human skeleton in India today is through hospitals, which use the bones of bodies left unclaimed. However, smugglers often find a way to forge the necessary paperwork, the officer told CNN.

In 2007, around 20 skulls and numerous other bones were discovered in a series of raids across Burdwan, leading to six arrests.

A year later, two bags containing 70 human skulls were seized near the India-Nepal border, the newspaper reported, while in 2009, a man was caught on a bus in neighboring Bihar state carrying 67 skulls. 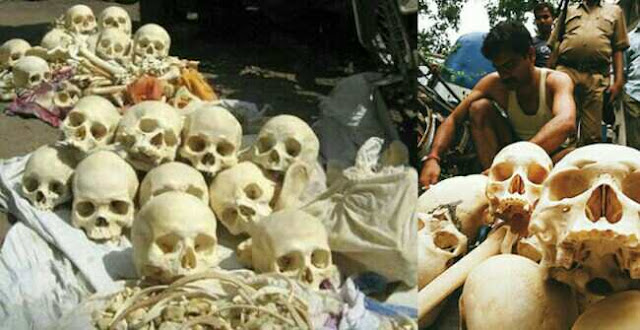