There was no word from the Centre on the Morcha's claim, but party leaders said they were "extremely satisfied" with the outcome of the meeting in New Delhi.

Morcha chief Bimal Gurung said in a statement: "We met Prime Minister Narendra Modi with the demand of creating a separate state of Gorkhaland. The Prime Minister reiterated that he has not forgotten the word given to the Gorkhas and he gave us a commitment to start the process of forming Gorkhaland in the near future."

Gurung's statement is an indication that the Morcha would use the claimed "commitment" to bolster its image in the run-up to panchayat and civic elections in the Darjeeling hills and also in the Gorkhaland Territorial Administration (GTA).

The Morcha has been facing pressure within and outside the party, with many accusing it of "forgetting" the Gorkhaland demand. Its decision to join hands with the BJP has also been criticised. To add to the Morcha's worries, the Trinamul Congress has been making rapid inroads into the Darjeeling hills.

While addressing an election rally in Siliguri on April 10, 2014, Modi had said the "dream of Gorkhas is my dream".

Gurung yesterday said the Morcha delegation reminded the Prime Minister about his statement and told him "it was time to fulfil the dreams of the Gorkhas".

"We also told the Prime Minister that the Darjeeling hills and the Dooars were a 'chicken's neck' for the country and that creating Gorkhaland would be in the interest of national security," the Morcha chief said.

N.B. Khawash, the Trinamul working president in the Darjeeling hills said the people had "seen through" the Morcha's "lies".

"Earlier, they had claimed a committee would examine the Gorkhaland demand, but nothing happened. On several occasions earlier, the Morcha had claimed after meetings that they had raised only the statehood issue. But official communications from the Centre later suggested the talks had centred around funds for the GTA. Today's claim, too, is hollow. People have seen through their lies. Their claim is election-centric," Khawash said.

The Morcha recently joined an umbrella organisation demanding separate states of Bodoland, Bundelkhand, Vidarbha, Purbanchal and Twipra Land. The National Federation of Smaller States decided last Friday that it would hold a series of protests, including the submission of a memorandum to Modi, and hold dharnas and bandhs in the six areas simultaneously.

The Morcha's youth wing has been putting pressure on the party to re-start the statehood agitation. Prakash Gurung, the youth president of the Morcha, has resigned from the Gorkhaland Territorial Administration to "work for statehood".

The Morcha said at today's meeting, the leaders also demanded the granting of Scheduled Tribe status to 11 hill communities and setting up a central university in the Darjeeling hills.

"The Prime Minister assured us that the process of granting tribal status to the 11 communities would also be started once the report is placed to the Centre," Gurung said.

Granting of tribal status to the Bhujel, Gurung, Mangar, Newar, Jogi, Khas, Rai, Sunuwar, Thami, Yakka (Dewan) and Dhimal communities has been a long-standing demand in the hills. 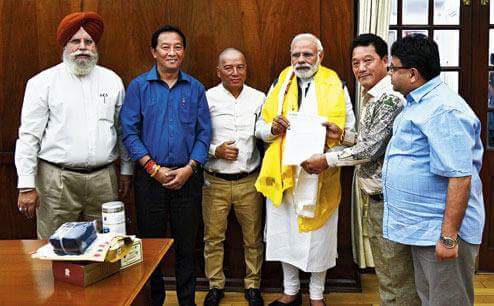