According to reports, a young woman, Saraswati Naskar, gave birth to a baby boy, her first child, last Friday (Mar 10).

Both were under treatment in the Nursery Ward on the second floor of Eden Building at Calcutta Medical College and Hospital.

The mother claimed that a middle-aged woman took her baby in the afternoon, saying that the newborn was being taken for a routine check up and vaccination.

Since then, the woman along with the child has remained untraceable, according to reports.

Saraswati Naskar, whose baby son has gone missing, said, "A middle-aged woman, wearing a white and green coloured saree, took me and my child for check up and directed me to bring a blood test report lying at my bed."

"When I returned with the reports a few minutes later, I found neither that tall woman with fair complexion nor my baby," the new mother, who is a resident of Kolkata's Bagmari area, said.

The incident triggered tension at the hospital premise and family members of the patient staged a demonstration and allegedly vandalized the hospital.

When policemen went to the scene, a scuffle ensued with the patient party.

Later, more police personnel were rushed to the spot who brought the situation under control.

However, a complaint of child theft has been lodged at the local police station and before the superintendent of the government hospital.

A senior official of Calcutta Medical College and Hospital said that the authority is looking into the matter.

"We have informed the state health department and only they will talk to you further about the matter," the official said.

Police have also started a probe into the incident.

A senior official of Kolkata Police said, "We have commenced investigation into the alleged child stealing from Calcutta Medical College and Hospital."

"The the CCTV cameras could not capture the incident properly, Therefore, we are taking eye-witnesses' statements to get an idea about the matter," the officer added.

According to hospital reports, Saraswati Naskar and her son were scheduled to be released from the hospital on Wednesday.

According to reports, police personnel have been posted at the hospital campus as situation is still tense there.

"I have just been informed that the patient's family members have gathered inside the Eden Building of Calcutta Medical College and they are trying to ransack the hospital," a senior police official said.

"We are deploying a heavy police force to bring the situation under control and to avoid any untoward situation further," the official further said.

Further a reward of Rs 1 Lakh has been announced whoever gives information on the lady who stole the baby. 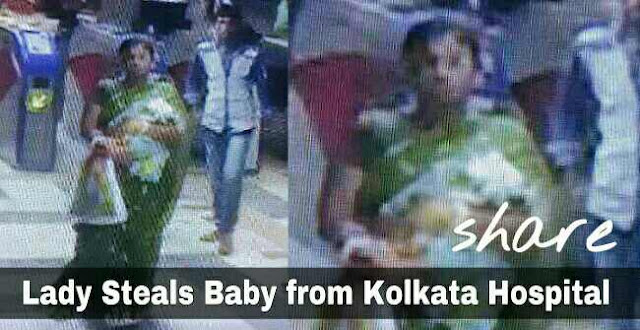