N Biren Singh to be sworn in as chief minister of Manipur today, Sikkim CM to attend ceremony

The BJP alliance with regional parties, led by N Biren Singh has been invited to form the government in Manipur by Governor Najma Heptulla. The swearing-in is expected to take place at 1 pm today.

In Manipur, the BJP, which is the second largest party behind incumbent Congress, has claimed that it enjoyed the support of 32 MLAs in the 60-member assembly.

Speaking to India Today, CM designate Biren Singh claimed that more MLAs will be joining the alliance soon, hinting that the political churn may not end soon. He also promised to end the economic blockade imposed by the United Naga Council within 48 hours after the government settles in post the floor test.

Governor Najma Heptulla on Tuesday addressed the media defending her stand to invite the Saffron Party to form government in Manipur. "Hope Manipur will have a responsible opposition," she said.

The Congress, however, has been crying foul as it wasn't invited by the governor for government formation despite being the single largest party in the polls. Heptulla called it a decision "taken in favour of stability in the state". 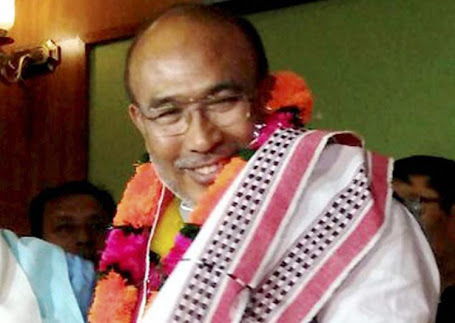