A piece of history of Darjeeling tea industry was engulfed in a fire that destroyed the bungalow of Makaibari tea garden near Kurseong yesterday afternoon.

None was injured in the blaze whose cause is yet to be ascertained.

A source in the garden said the property was a veritable museum. "We were so proud of the bungalow that was filled with mementoes received from around 87 countries. There were rare collections of books and artefacts that reflected the estate's history. Stuffed skins of tigers and leopard were hanging from the walls of the building. The bungalow had other wildlife trophies also. The entire history is lost now," said a source in the plantation.

Swaraj Kumar Banerjee, better known as Rajah, the chairman of the Makaibari Tea and Trade Company, was not in the garden when the fire broke out. He had left for Calcutta earlier in the day and his wife, Srirupa, was in the bungalow.

"The chairman's wife was in the bungalow, along with a nurse and two maids. But they were all rescued from the semi-wooden structure," said the garden source.
Debashish Chattapodhya, the subdivisional officer of Kurseong, said: "The fire started between 2.30pm and 2.45pm and is now under control (after more than three hours). The entire building has been razed to the ground. There are no reports of any casualty."

Only concrete walls and some tin roofs were intact after the blaze that was extinguished by fire tenders from Kurseong and Siliguri. Rajah did not take calls on his cellphone.

The Banerjees have been running the garden for four generations since 1859. It's not clear when the bungalow had been constructed. The estate is 3km from Kurseong.

In 2014, Rajah "allied" with The Luxmi Group of Calcutta with an eye on strengthening the brand. The garden, however, functions under Makaibari Tea and Trade Company.

Makaibari is a global brand of Darjeeling Tea. In 2015, Prime Minister Narendra Modi had gifted Makaibari's most expensive tea brand, Silver Tips Imperial, to Queen Elizabeth during his visit to England. In 2014, the tea brand had fetched Rs 1.12 lakh a kg. Normally the garden retails the product for around Rs 20,000 a kg. 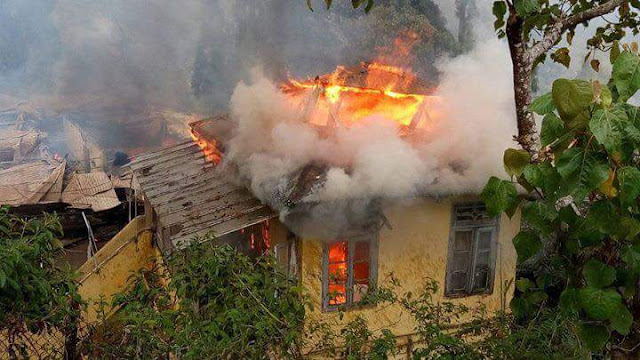