Lucknow: A suspected terrorist, associated with the Khurasan module of the dreaded terror outfit ISIS, was killed after 12 hours of anti-terror operation by the Uttar Pradesh Police's Anti-Terror Squad (ATS) commandos in Lucknow's Thakurganj area.

Additional Director General of Police (Law and Order) Daljit Chaudhary confirmed the operation was over with the killing of the IS operative.

"After opening the doors of the house (where the terrorist was holed up), the force went inside and found the suspect dead along with weapons," Additional Director General of Police (Law and Order) Daljit Chaudhary said.

Chaudhary said, initially it appeared that more than one person was holed up inside the house.

Initially, it was suspected that there were two IS operatives inside the house but that turned out to be a false alarm as police found the body of only one.

Eight pistols, 650 rounds of ammo, 50 fired rounds, explosive materials, gold, cash, passports and SIM cards were recovered from the house where the alleged terrorist was killed.

The IG ATS Aseem Arun confirmed that the slain terror suspect was an active member of the ISIS.

"The slain terror suspect belongs to the Khurasan module of the ISIS and was an active member. But, whether he has been indoctrinated or not is a matter of investigation," Arun said.

The operation was initiatd by the ATS aftert it received information from the intelligence that Saifullah was allegedly involved in a train blast in Madhya Pradesh.

The ATS wanted the IS operative to catch him alive, but all their efforts went in vain.

The ATS commandos then stormed inside the house (after issuing a warning to the terrorist), Arun said, adding "The suspected terrorist then fired at the ATS commandos, which was then appropriately retaliated by the ATS commandos. After this, two rooms were thoroughly searched and checked, and the person identified as Saifullah was found dead."

Blast in Bhopal-Ujjain train
At least 10 perosn were on Tuesday injured in a blast in the Bhopal-Ujjain passenger train near Jabdi station in the district.

Later, three persons were detained in connection with the blast.

The blast took place in a general coach of the train near Jabdi station in Shajapur district between 9.30 AM and 10 AM, a railway official said.

In a related development, another suspect of a sleeper module has been held from Kanpur by the ATS.

Police picked up two suspects from Lakhna in Etawah and three in Kanpur. Following the Lucknow gunfight, an alert has been sounded at the Lucknow International Airport and at prominent railway stations across the state.

Police and intelligence officials have been directed to step up vigil and keep a close watch on busy thoroughfares, malls and markets. 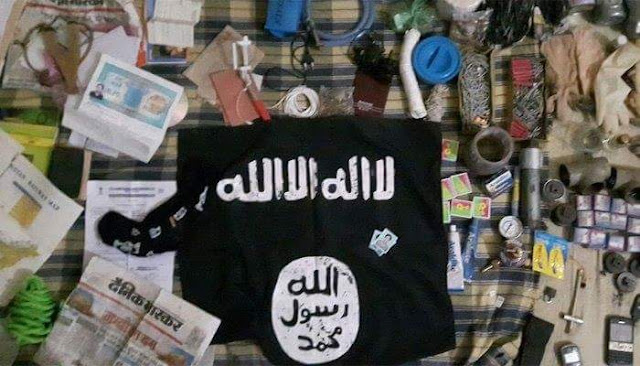