Incidents of honey trapping are very common these days; no doubt, social media is a great way of connecting with people, but at times, it is damn risky. This 37 year old IT professional from Pune, might be regretting his decision of accepting the friend request of Sandra Robinson, after she duped him of Rs 11 lakhs.

Yes, a woman who claimed to be from London, sent a friend request to this techie on Facebook and systematically looted him. Well, he never knew that this one request would prove to be so expensive.

Last September, a girl called Sandra sent a friend request to this IT professional. They started having long chats and their friendship strengthened over a period of time. The duo exchanged numbers and began talking on phone regularly. In the month of December, the woman told him that she wants to visit India and asked him to guide her.

The techie agreed to do so, but in the same month, he got a call from a Delhi number. The man on the call told the IT professional that he’s a customs official and is calling from Delhi airport. The man also told him that his friend Sandra had been detained at Delhi airport because she lost her documents. Not only this; the official also informed that the woman carried foreign currency, diamond jewelry, laptops and multiple smartphones. He told the techie that if he wants his friend to be released on bail, he should pay some amount of money. Unaware of everything, the techie quickly deposited Rs 35,000 in the bank account that the man provided.

After paying Rs 35,000, the man again called him up and demanded some more money for Sandra’s release. The victim made multiple transactions and in all, he paid Rs 11,43,500. After that, Sandra broke contact with him and this is when the victim got suspicious.

After his multiple attempts to get in touch with her failed, he filed an application with the cyber crime cell of Pune Police, based on which a case was filed against Sandra at Hadapsar Police Station, under IPC sections 419 and 420.

Inspector Anjum Bagwan, who is looking into the case said,

“When there was no reply from the woman even after paying the amount, the man got suspicious. On digging deeper, he realized that it was a honey trap. Based on the account numbers given by the victim to us, we found that these bank accounts are from various parts of the country. We are now taking the help of the cyber crime cell to trace the fraudsters.”

This honey trapping incident is a lesson for all of us; instead of accepting friend requests of random people and giving in to their demands, we must try investigating each and everything. Let’s see if Sandra is trapped. 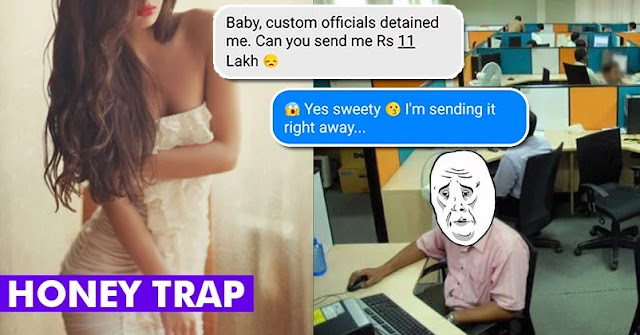