The University Grants Commission has said that there are 23 fake universities and 279 bogus technical colleges in the country.

Minister of state for human resource development Mahendra Nath Pandey told the Rajya Sabha recently that the ministry had written to state governments to investigate the matter and register police complaints against fake universities.

States have also been asked to initiate proceedings against those involved in defrauding and cheating students “by misrepresenting themselves as ‘universities’ awarding degrees with their name”, Pandey told the Rajya Sabha.

Menace of fake institutes is widespread and is getting increasingly lucrative, as more students look for higher education to improve their job prospects.

Here is a list of the 23 fake universities in the country:

* Bhartiya Shiksha Parishad, Lucknow, UP - the matter is subjudice before the District Judge - Lucknow

The details of fake universities are available on the UGC website www.ugc.ac.in.

Note: Go to this website to see the list of fake/unapproved technical institutes in the country compiled by AICTE. 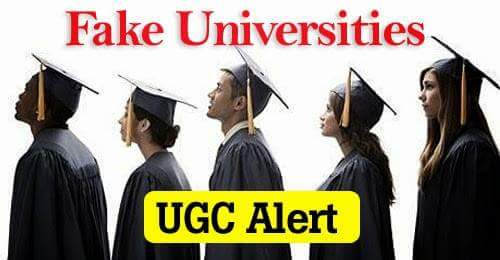