Srijato Bandopadhyay's poem titled  "Abhishaap" (Curse) was taken down by Facebook authorities two days after a Siliguri student lodged a criminal case against the poet for allegedly hurting the sentiment of the Hindus.

The 6-stanza poem, posted on Facebook on 19 March, drew flak on social media for its veiled remark on the newly elected UP CM Yogi Adiyanath. The  poem was taken down by Facebook authorities two days after a Siliguri student lodged a criminal case against the poet for allegedly hurting the sentiment of the Hindus.

Srijato, in turn, sought police protection following a volley of distressful comments by users. After having taken down the post, a Facebook spokesperson clarified saying, "The post was accidentally removed and has now been restored. This was a mistake, and we are sorry."

On March 22, the police registered the case 295A of the IT Act which carries a maximum sentence of three years in prison and/or fine. Following the 'accidental' ban by Facebook and hate from several quarters, there were others who came it to show support for the poet.

"These people were not just supporting me. They were raising their voice in favour of democracy.... They were taking a stand against fundamentalism and for freedom of speech. I am indebted to them," said Srijato.

Sunil Gangopadhyay's US-based son Shouvik shared a post in support of the poem and wrote, "I am re-posting a poem that I am told was removed, based on Facebook policies of 'abuse'," he added, "I am hoping it was not a knee-jerk reaction based on what has been a public display of chumminess between Mark Zuckerberg and the current Indian ruling party."

Chief Minister Mamata Banerjee had on same evening told a TV news channel that "There will be no problem (for the poet) and I will take full care. "I have asked the police to conduct an investigation into the matter and submit the report to me. Do not worry," she had said.

Here's a rough translation of his poem:

Medicate on time, else most illnesses grow/spread,

You rustic yogi!, you have become a raja from asking alms on the streets

And at once you are commanding, your religious demands in every direction,

On mrigaya, you look for a woman of a different religion.

You want to have your claim even on the dead deer's flesh,

In this kind of Raj, you won't get an easy death/you won't be killed easily.

A strong winds sets in the air, sending ashes of 'adharma'/ lawlessness across the country

Every election, we go back a century in time

Where patriarchy is religion, religion is another name for man's rule,

And I am woman victimised even after crosses death

Whenever you pull me out of my grave and rape me,

Your religious trishool would be wearing the condom 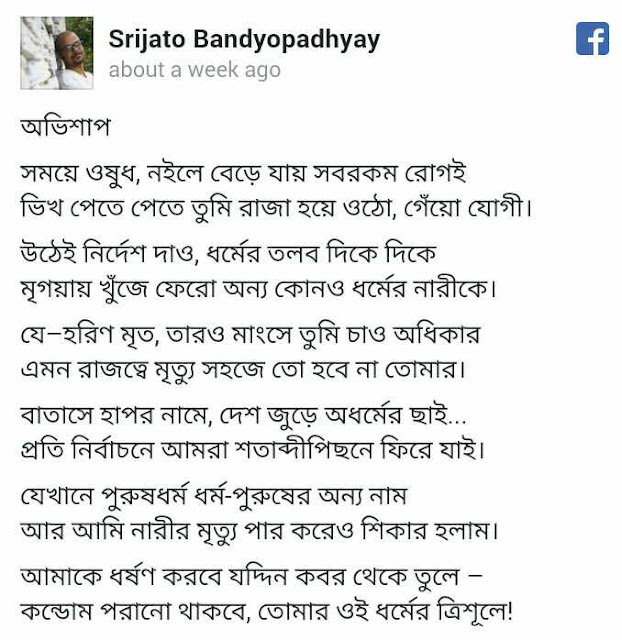