Less than one week after the BJP formed a government in neighbouring Manipur, virtually the entire state unit of the Trinamool Congress in Tripura on Thursday joined the saffron party, sending signals that the forthcoming assembly elections in the Northeastern state – slated for early 2018 – will be a tough one for the ruling Left Front.

Thursday’s joining was led by Ratan Chakrabarty, chairman of the state TMC coordination committee, who along with 15 other members of the state committee were welcomed by the BJP in the presence of Rajen Gohain, a senior party leader who is also union minister of state for railways. Chakrabarty, a veteran leader, was a minister in the last Congress government in the state from 1988 to 1993.

Welcoming the TMC leaders into the party fold, Rajen Gohain, union minister and four times Lok Sabha member from Assam, said the BJP was growing from strength to strength in the Northeastern region in the past few years. “While we already have three governments in the region now, the people of Tripura too are mentally preparing for a massive change early next year,” Gohain said.

State BJP president Biplob Kumar Deb and central observer Sunil Deodhar were among those who were present when the TMC leaders – all of whom were earlier in the Congress – joined the party in Agartala.

Two weeks ago, the BJP had received the first boost in the current year when former Tripura TMC unit president Surajit Dutta, along with state unit legal cell head Nitai Choudhury had also joined the saffron party. Dutta had joined the BJP in the presence of Assam chief minister Sarbananda Sonowal and BJP national general secretary Ram Madhav on March 10.

In Guwahati, senior Assam minister and BJP’s NEDA convenor Himanta Biswa Sarma said the BJP would fight for power in Tripura in the ensuing assembly election which is less than one year away from now. “Our organisation in BJP is growing, and committees at the booth level have already become very active. One thing is for sure, we will fight to get power in Tripura,” Sarma told The Indian Express.

“There is will be a tough fight in Tripura, especially because the Left has a strong organisation there. Moreover, we don’t as yet have any representative in the state assembly. Of course, we did not have an MLA in Manipur too, but then we won the elections and formed the government there,” Sarma, who will launch his Tripura campaign from May, said.

The BJP, which did not have any major presence in Tripura till two years ago, made its first impact in December 2015 when the party for the first time won four municipal wards and polled a record 14.24 per cent votes, in the process also relegating the Congress to the third spot in terms of percentage of votes polled in the major towns. 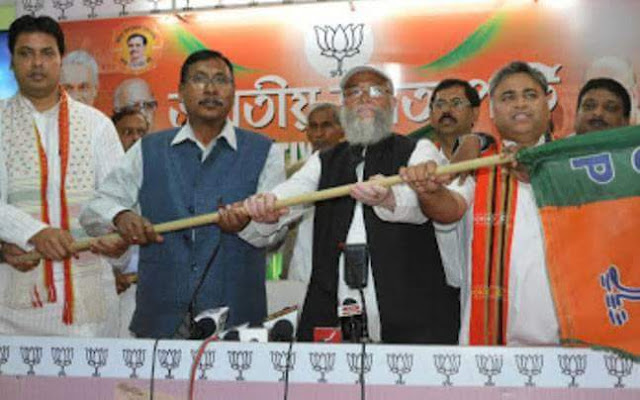