Even if Mamata Banerjee comes to hills 100 times, we will win all elections - says Bimal Gurung

Bimal Gurung yesterday thundered that "I am the leader of the hills" and the Gorkha Janmukti Morcha would win all elections even if Mamata Banerjee visited the region 100 times.

The Morcha president's assertion came a day after he had claimed that the Prime Minister had expressed his "commitment" to start the process of forming the Gorkhaland state.

"You may conduct elections in the hills whenever you want. But it is sure that we will win them. We are not into politics just for the sake of elections. We will win not only the civic elections but also all future polls in the hills," Gurung told newspersons at Bagdogra airport after his return from Delhi.

Elections to four hill municipalities are tentatively scheduled for May.

Biswas had been touring the hills this week, during which a large number of Morcha leaders and workers joined Trinamul.

The Morcha chief said his party would win elections in the hills irrespective of the number of times Mamata set her foot in the region.

"She has already visited the hills 50 to 60 times. Even if she visits the hills 100 times, there will be no political impact and we will win elections," he said.

The assertion from Gurung comes three days ahead of Mamata's north Bengal trip. The chief minister is scheduled to arrive in the region on March 27 and will visit Mirik on March 30.

"First of all, he could meet the Prime Minister yesterday and if his claim is correct, he got some assurance from Narendra Modi over their principal demand of a separate state. This has boosted his confidence. It would not be surprising if we get to see Morcha leaders, including Gurung, speak about the meeting with Modi and invoke the Gorkhaland demand again ahead of the civic polls," an observer said.

Secondly, he pointed out, the frequent defections by Morcha leaders and workers to Trinamul had left Gurung exasperated.

"Even during the recent visit of Aroop Biswas, two prominent party leaders of Kurseong and Mirik switched to Trinamul. In fact, there were defections even in Darjeeling subdivision. These developments have worried him," the observer said.

Gurung today said some Morcha leaders and supporters had joined Trinamul for money.

"Some people have sold themselves to the party. Still, people are with us. The ruling party is trying to coax the young generation of the hills by offering jobs. But it is not so easy. The youths can well understand that everybody holding Trinamul's flag will not get jobs," he said.

Trinamul leaders in the hills refused to react to Gurung's remarks in public.

However, a hill Trinamul leader, who didn't want to be named, said: "The Morcha president is perturbed over the coming civic polls, which would be followed by panchayat and GTA elections. People have started walking out of his party because whether it is at the civic boards or the GTA, the elected representatives of the Morcha have failed to deliver. They could not meet the aspirations of people." 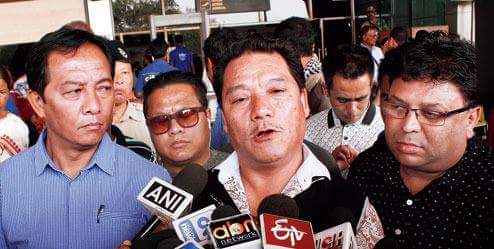