Much like everything else new, a new district also has an allure about it which is hard to resist. Unable to witness the historic Valentines’ Day formation of Kalimpong as a new district, anguished and restless, I travelled to the most happening places in our Darjeeling hills – Kalimpong, the newly minted district and this is what I found.

18th of Feb, 7:45 AM: I picked up two passengers along the way, they were both travelling from Jorebunglow to Lamahatta, one of them was working in Darjeeling town and he said he goes to work to town every evening and heads back home in the morning, and the other said he was tired of a regular job and had quit.

Apparently both were from the same village, but didn’t know each other. The “tired of regular job” guy says he has been living in Rockville for over 20 years and doesn’t know many people from back home, the other guy who worked nights knew everyone in his family, including his long dead ancestors. After short bouts of awkward talks, I decided to provoke them and opened up with my happiness about the formation of Kalimpong district. While the guy who worked nights clammed up, the other dude opened up.

He knew “exactly what was going on”, and gave both of us a piece of his mind. According to him, Kalimpong district is a clever ploy by Mamata to wean away those who were disgruntled with GJM, in order to bolster support for TMC… “Kasailai paisa le, Kasailai power le… ani Kasai lai dar dekhayera kini sakyo… sab Gorkha ko ekta ani Gorkhaland ko sapna turne chaal khali ho” is what he added.

We bid good bye to each other at Lamahatta, a place much loved by Mamata and is being promoted as the latest Home Stay destination.

My next companion was a teacher who worked in Sikkim. Surprised, I asked her how she managed to land a job in Sikkim, with us being “pari ko” these days, and looked down upon. She said she had joined as a teacher, when Sikkim didn’t have enough educated people. “Sikkim ko haru lai ABCD chinaune nai Darjeeling ko ho nani… aile ABCD chini sakera chai hami lai nai ‘O U T S I D E R’ bhancha… khai k bhannu” she lamented.

She got off in Chitrey and went her way to the land where today she is regarded as an O U T S I D E R by the same students whom she taught ABCD...

Journey into Kalimpong from Chitrey was educative in and of itself. It taught me how much Mamata is loved, and by which community specific board. From Kinchuk Darmit to Nalsang Dolma to Mamata Taata to Mamata Angyi… various boards had claimed their direct blood-relationship to her in huge hoarding boards.

But it was the Kalimpong town that left me speechless.

The entire main road was covered in TMC festoon and ribbons, and hoardings of various shapes and sizes proclaiming their love for Mamata hung every two feet away. Even the police assistant booth was covered in TMC flags, perhaps attesting to the fact that Kalimpong now belonged to Bengal.

TMC flags adorned the same Main Road, where on July 27th, 1986 the blood of brave Gorkhas had been spilled like water by the Bengal government. Seeing the Mamatafied Main Road in Kalimpong reminded me that the Gorkhas are brave no more, we have instead become greedy.

The entire town reeked of TMC money and resultant sycophancy, and I am sad to report it has ruined the ambiance of a lovely little town.

But… amidst all the TMC flags, banners and posters, silently proclaiming our heritage and roots were the signboards above most shops that proudly carried forward the legacy of our ancestors, and the sacrifices made by our brave-hearts – in the address they read GORKHALAND

District or no district, the people in Kalimpong are still the same… amazingly kind, caring and open-hearted. In Bong-busty a man around 65 told me, “khai nani ma ta Darjeeling andolan ko time dekhin jaanu na pareko…” I asked if he meant 2007 andolan, he clarified “haina  Ghising ko andolan dekhin”…. So I asked him if he didn’t have to do any administrative work, he said, “sabai mathi BDO ra SDO office batai huncha hamro, jaanu parthyena”… so much for the administrative inconvenience faced by Kalimpong denizens due to district headquarters being far argument many were giving to justify the new district.

“To each, their own” I said in my heart, and toasted a peg of local raksi to the new district.

What really got my goat was the fact that I am a vegetarian and on Sundays majority of the Veg restaurants were shut down. I tried Evergreen, it was closed… someone sent me to Sikhar it was closed too and so were most of the restaurants that would sell local fares of Momo and Thukpa… finally I got lucky and found a Veg restaurant on the Goskhan road… it was aptly named “Veg Restaurant.”

It was a small dingy place, but crowded to the brim… Typho was crap, Momos were ok, Thukpa was awful, but the acchar was brilliant… so much so that I remembered the face of the restaurant owner the next day morning (hit LIKE, if you know what I mean :) )

So here I was in the heart of Kalimpong district trying to get a feel of the place and its people… and all I could think of was the acchar I had the day before… such is perhaps the story of Gorkhaland too… we started with the demand for a state of our own, and each got a Development board to remember Mamata by each morning…

[BK's observations on Kalimpong District and its lovely people will continue in the coming days, please stay tuned] 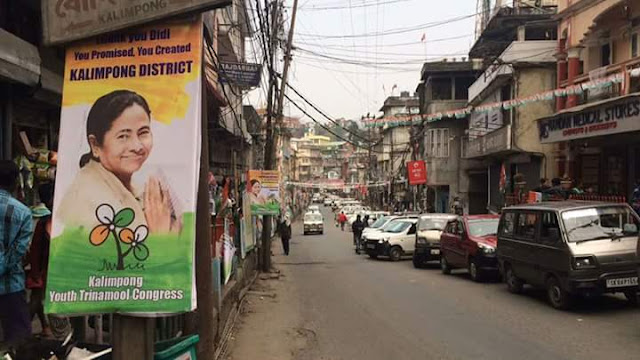