The data presented by the Union government in Rajya Sabha yesterday showed that 3,856 women and children had been trafficked from Bengal in 2015 and the number increased to 6,672 the following year, the highest in the country.

Krishna Raj, the Union minister of state for women and child development, said in Rajya Sabha that in 2016, a total of 19,223 women and children had been trafficked from all states and union territories in the country. Among the states, Bengal recorded the highest number of trafficking cases at 6,672.

The minister has presented the data compiled by the National Crime Records Bureau (NCRB) at a time several cases of child trafficking have been registered in Bengal, from Baduria in the south to Jalpaiguri in the north.

In 2016, the number of women and children trafficked from Bengal has increased by 72 per cent and 73 per cent, respectively, compared to the previous year.

In 2014, the state, according to the NCRB, had reported the highest number of children missing: 14,671. A substantial number of the missing children are victims of trafficking, say government sources.

The other states that reported high numbers of trafficking are Rajasthan, Maharashtra and Tamil Nadu (see chart).

"In north Bengal, the most vulnerable are tea estate dwellers in the Dooars. Human traffickers can easily lure children and women with offers of jobs in other states," said Soumen Nag, a researcher based in Siliguri.

The government sources said the actual number of trafficking cases might be higher than the NCRB figures as several incidents went unreported. "Sale of children from an orphanage in Jalpaiguri has recently come to light. If such cases are put together, the figures will go up," a retired administrative official said.

A senior state government official said: "Bengal lies along both national and international borders. Maybe, more cases of missing persons are lodged in our state as the government insists on filing an FIR, not a general diary, for every missing person."

"We have been working closely with police and the government in rescuing victims. We need to move further into interiors of the state to spread awareness among girls," said Rishi Kant of the NGO.

Awareness campaigns have played a vital role in preventing human trafficking in South 24 Parganas. The district, which used to report the highest number of trafficking incidents in Bengal, has shown a steady decline in the cases after the police took up a campaign, which was formalised as Swayangsiddha a year ago.

Kant said although trafficking cases were higher in the state, the rate of recovery of victims by the police had also gone up, pointing to the NCRB figures placed in Lok Sabha on February 7.

"Police teams from different parts of Bengal often visit Delhi and other parts of India to rescue victims. Most importantly, they are targeting traffickers now," Kant said. 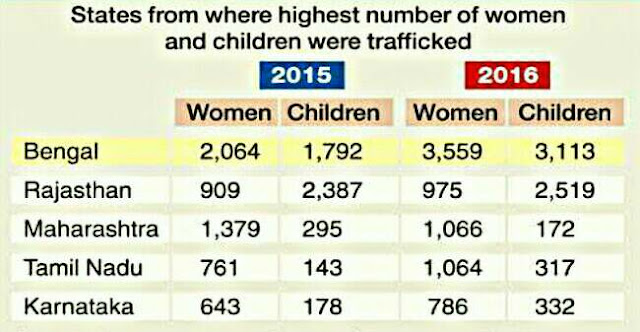