Sources close to Chandana Chakraborty, arrested in connection with alleged illegal sale of infants, today said the CID should also investigate the role of government officials and members of the Child Welfare Committee of Jalpaiguri district in the case.

Chandana used to run an orphanage in Jalpaiguri from where infants were allegedly sold to childless couples in India and abroad.

BJP Mahila Morcha leader Juhee Chowdhury was also arrested for allegedly helping Chandana get financial assistance and clearance from the central government. The CID is in search of Juhee's father, Rabindranarayan Chowdhury, a BJP state committee member. Both the father and the daughter were removed from their posts in the BJP.

A source close to Chandana said: "There are a number of state government officials posted in Jalpaiguri who cannot evade their responsibility of keeping tabs on the activities at the orphanage run by Chandana. The Child Welfare Committee of the district that comprises people from different walks of life has also similar responsibilities. The officials and members of the CWC have the authority to check whether the children staying at the orphanage are being illegally sold.

"The investigating agency should find out why these people were silent and whether any of them was involved in the alleged child trafficking. We have come to know that the agency has found the involvement of a government official who has accepted benefits from Chandana."

Sources close to Juhee said she had just extended help to Chandana to run North Bengal People's Development Centre, the NGO under which the orphanage functioned.

"Extending help to an NGO does not mean that she is involved in child trafficking. Chandana had approached her to get some assistance to run the shelter," said a source.

The CID hasn't so far questioned any government official in connection with the case.

Observers said if the role of government officials was under scanner, the BJP that was cornered following Juhee's arrest would find some sort of comfort.

"The Trinamul Congress has already launched a series of movements in Jalpaiguri and demonstrated before the state BJP president and the BJP office. In such a situation, the BJP does not have much to attack the state government with other than raise old corruption charges. There is no doubt that if a state government official or a CWC member is booked by the CID, the BJP would find at least a counter point to make," an observer said.

Sources in the CID said Juhee had indirectly paid Rs 4.5 lakh from three different bank accounts to Chandana in February. The transaction was not made directly between Juhee and Chandana.

During interrogation, Chandana has named two BJP leaders. "We have also found some links which corroborate her statements. Names of more people with political links and who had helped Juhee in Delhi have been dropped by her," a CID official said.

"In due course, all those named by the duo would be questioned," he added.

The agency is also looking for Juhee's father. "We need to talk to him to know whether he had any role in the case. We understand that he had information about his daughter's whereabouts (when Juhee had gone into hiding) but he did not reveal it to us," a source said.

The probe has also revealed that Juhee had fled to Nepal after Chandana's arrest. "She wanted to evade the arrest but eventually returned and started staying at an acquaintance's place in Kharibari," CID source said.

Juhee had been picked up by the CID on Wednesday night. 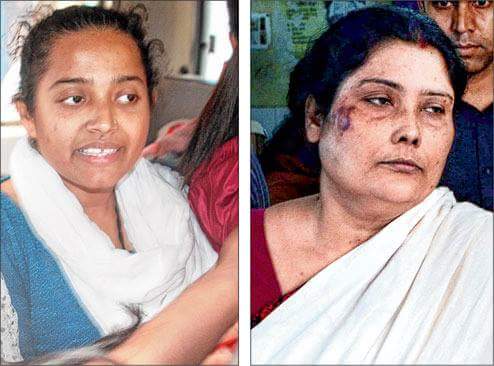