Darjeeling shivered on Monday morning as the minimum temperature nosedived to 4°C. The maximum temperature did rise to 16°C but thundershowers in the hill station and snowfall in the upper reaches drove tourists and locals indoors after sunset. With thunderstorms forecast on Tuesday as well, the weather will remain chilly, offering tourists a feel of true-blue winter in spring.

On Monday, the minimum temperature was 3° below normal and, according to locals, much colder than what December and January has been this season. With Sandakphu at 11,929 ft receiving unprecedented snow at this time of the year last weekend, cold winds rolled down the slopes. One could literally feel the chill in Darjeeling perched at 6,812 ft.

"The weather in the Hills this March is unlike anything that we have experienced before. After a winter that has been warmer than usual, we are in spring that is colder than usual. In fact, Darjeeling on Monday felt like December-January rather than March," said Pradeep Lama who is in the travel trade.

Anil Tamang, coordinator of Singalila Land Rovers' Association at Mane Bhanjang, the starting point to Sandakphu, says he hasn't witnessed such heavy snow in March. "The roads usually become un-motorable in the height of winter when it snows. But I have never seen something like this in mid-March. The road to Sandakphu is still not motorable beyond Tumling," he said.

Jawans of SSB, the paramilitary force deployed in the region, have managed to bring stranded tourists, mostly trekking enthusiasts, down from Sandakphu. Tourists moving uphill are being allowed to proceed till Tonglu and Tumling. But they can do so only if they carry enough provision to last them the to-and-fro trek. On Monday, around two dozen tourists went to Tumling (9,600 ft) and Tonglu (10,131 ft) before returning to Mane Bhanjang via Meghma. They were told to carry food, including dry fruits, water and emergency medicines. At Tonglu and Tumling, there is scarcity of food and water as supplies have stopped since Friday due to bad weather.

"It usually snows in December and January. But it didn't do so this year. It is doing so now. This is very unusual. Had there been a hailstorm, it would have been normal," said Tamang. On Monday, it snowed again at Sandakphu but the intensity wasn't that much to cause further alarm. Suresh Periwal of Club Side Tours & Travels, felt the snow at Tumlung, Timling, Meghna and Mane Bhanjang at such an odd season was reflective of climate change. 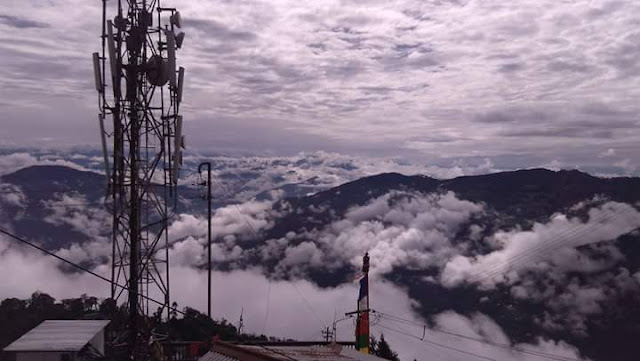