Nearly nine hours after a newborn boy was allegedly stolen from Calcutta Medical College and Hospital in central Kolkata, police on Tuesday night booked a suspected woman from city's Bagmari area and rescued the baby from her home, officials said.

According to reports, the middle-aged woman, Chinmayee Beij, and her husband have been detained from their residence at Bagmari and currently they are being quizzed.

"We have rescued the stolen baby and brought him to Calcutta Medical College and Hospital," a senior official of Kolkata Police said.

Locals said that after watching the suspect's CCTV footage on TV news channels, they identified the woman and informed local councilor and police.

According to local media reports, residence of the suspect was vandalized by locals.

Earlier in the afternoon, nearly 26-year-old Saraswati Naskar, who is also a resident of Bagmari area, alleged that a woman had stolen her baby son, who was born on last Friday (Mar 10), from the hospital's Eden Building in broad daylight.

Hours after the incident, city police released a suspect's CCTV footage and had announced a reward of 1 lakh rupees to catch the woman.

However, police have started investigation into the incident, while the detained duo are being interrogated.

"We will conduct a DNA test of the baby to confirm his identity," a police official said. 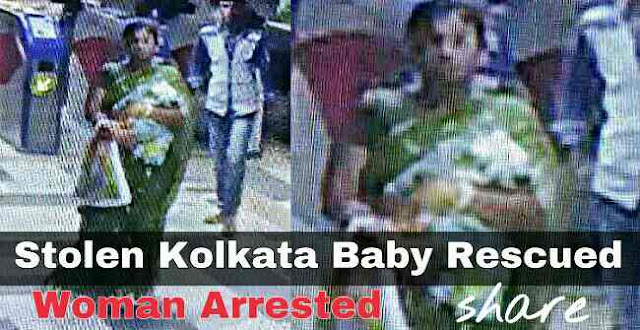