Defence minister Manohar Parrikar said that the Air Force would consider giving land under its possession for the expansion of Bagdogra airport, if a proposal to that effect came from the civil aviation ministry.

The Airports Authority of India's plan to augment the infrastructure at Bagdogra had hit a wall with the state government refusing to acquire the land for the purpose. The Bagdogra airport is located inside the Indian Air Force Station.

"Instrumental Landing System has been installed at the airport here and flights are allowed to operate from 6am to 10pm. If there is any requirement for land to expand the airport, a specific plan should come to us. We would definitely consider the proposal. At 14 to 15 other airports in the country, the defence ministry has provided land for similar purposes," the defence minister said.

Parrikar was speaking to the media at Bagdogra before leaving for Delhi yesterday afternoon.

For infrastructure expansion at Bagdogra, the AAI had sought 118 acres from the state government. But the state, as part of its non co-operation with the central government, said it was not possible to give that much of land at one go. The response made the AAI scale down the project and seek around 50 acre.

But the state later made it clear that it wouldn't give land free-of-cost for the airport expansion.

But the passenger traffic at Bagdogra is increasing every year and the number of daily flights would reach around 30 by August.

In such a situation, Parrikar's statement has come as a breather for the AAI.

"There are some stretches of vacant land with the Indian Air Force at Bagdogra. Now that the defence minister himself has hinted at the transfer of land, we hope we can launch the expansion project. However, there are certain issues which we will have to consider like how much of the available land is contiguous with the terminal building and its annex and likewise," an AAI official said.

The AAI has sought land to build a new terminal with double the size of the existing one and set up new parking bays, aprons and hangers for aircraft. There is also a plan to earmark more space for car parking.

The defence minister said the Survey of India had been engaged to do the mapping of Bagdogra and its surroundings.

"The mapping would be done to find out obstacles like high-rises and other structures to take-off and landing within 25km radius of the Bagdogra airport. The exercise, we believe, will commence soon," a sources said.

Parrikar said he would speak to the governments of Bengal and Sikkim so that land was made available for for defence establishments in the two states.

Earlier in the day in Darjeeling, the minister seemed to have given oblique support to Gorkhaland when he was asked about the statehood demand. "Everyone has to give the push, you are pushing and I am also ready to give the push but the decision has to be taken by the home minister," Parrikar said in the presence of Gorkha Janmukti Morcha president Bimal Gurung. 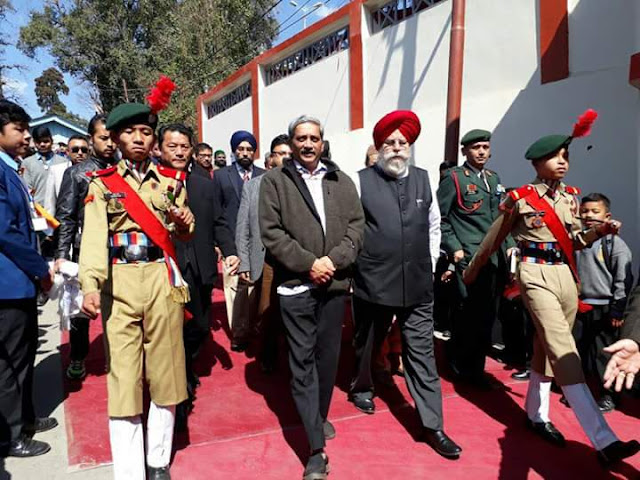