26 yr Gangraped Nepalese Woman Helpless in Delhi, is media and police on culprits side

On Holi when India was celebrating on other hand the five devils shambled once again country's capital New Delhi by raping 26 years old Nepalese Woman (Mother of two kid), those devils forced her to take alcohol threatening dire consequence.

A helpless Nepalese woman had no other option all alone sorrounded by five hounds , five devils one after another raped her.

She escaped jumping from a balcony nude, running for help, screaming that which was visible in CCTV footage too.

It was shocking to see some people didn't care to rescue her , thankfully someone came ahead reporting to Pandav Nagar PS.

1. Lakshay Bhalla 2. Vikas Kumar 3. Naveen, Swarit 4. Prateek.
While four of the accused work in call centres in Noida, Swarit works as an engineer in Tech Mahindra.

Now a dramatic twist has come in media, the five have alleged they paid Rs 5000 for a sex, the same statement now media are picking in consolation to exaggerate the story to give a 'Dead End'.

These are same media which strongly stood reporting shocking rape and murder case Nirbhay, those are same people who flayed the incident holding banners and raising slogans all where the Delhi.

So, why now this helpless Nepalese woman is being misinterpreted by dormant media, police and Delhi People instead of finding justice for her ?
Is this a capital of India where intelligent , social and farsighted people live and strong media thrives ?
Really all entities are now misjudging a Nepalese woman and trying to whitewash the heinous rape by branding it "Paid".
Really very much uncalled headline now media in Delhi are making and mocking to further traumatise that "Raped Woman". 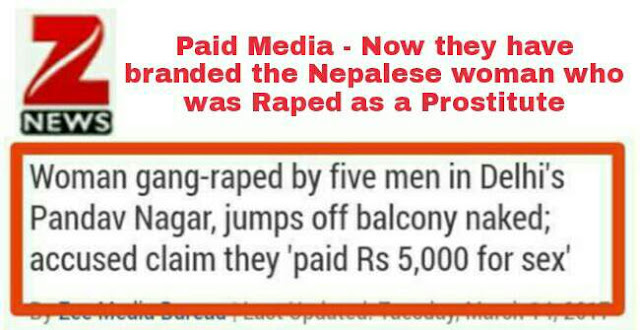