Shocking - He raped her, he killed her and then he burned her - She was just seven years old

It seems the word ‘Humanity’ has lost its meaning and it does not exist anymore in this world. There are many horrendous incidents happening around that send chills down the spine and are a testament to how desensitised we people have become.

It is readily agreed upon that no place is safe for women. It is the only chant we hear from any women who we meet casually anywhere. Despite the laws and awareness, fear grips us. This incident has proven how we as a human are moving towards a society which is hellbent to make this place unsafe for women and children.

On 5 February 2017, a pic surfaced on social media. It was of a 7-year-old girl Hasini who was missing from a place called Mugalivakkam in Chennai. The neighbours saw her playing alone 6:15 PM when her parents were away from home. After her parents returned, they couldn’t find Hasini. Despite innumerable attempts, they couldn’t find her. At last, they registered a complaint at Mangadu Police station.

After investigations, it was revealed from the footage that she was alone in the parking lot. Their 22-year-old neighbour S Tashvanth (a mechanical engineer) lured her to his flat on the pretext of letting her play with his dog. Unaware of the ill intentions, Hasini followed him. S Tashvanth sexually abused her and accidentally gagged her to death. He packed her body in a travel bag and burned it at Anakaputhur.

Initially, he pretended to help the officials, but when he was caught, he tried to deceive them saying that he was in a function when the crime took place. Using his call data, it was established that he had lied about the function. After sheer interrogation, he confessed his crime and guided the police to the place where he burned her lifeless body.

The Police has registered case against him under Indian Penal Code Section 211 (false charge of offence made with intent to injure) and 302 (punishment for murder). He has also been booked under POSCO Act.

It is indeed a shameful act. We are growing into monsters and have chosen to go astray. Few minutes of pleasure have taken down a life of a seven-year-old kid. We hope he is given exemplary punishment so that it sets out to other people who have ill intentions in their mind towards children. 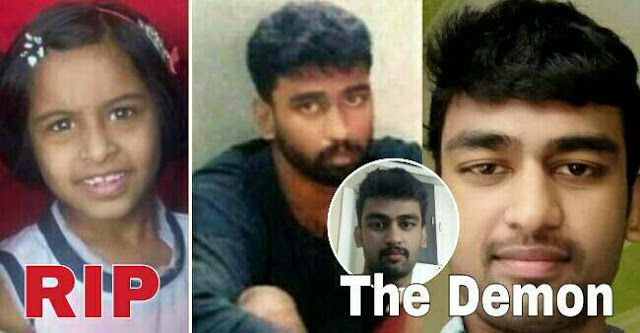