Meet Sikkims Chewang Lama a passionate racer whose creating waves in the region!

Ever since Chewang Lama, was a kid he was fond of cars, always looking for a chance to get behind the wheel,be it on the lap of his driver as he couldn’t reach the pedals. By the age of 12 he started driving and ever since he is in love with it, driving his passion

He is a resident of Pani house in the capital.

Growing up in place like sikkim where there are no race tracks or go kart tracks or any platform of racing,made it really difficult for him to even think of becoming a race car driver which was my dream.There was no one around to motivate or guide so all he could do for the love of the sport was play racing video games.

“Motorsport is an expensive sport so coming from a middle class family makes it more difficult to get into it”, he says.

It was in year 2014 when he finally got a chance to get into a real race spec car in at Buddh international circuit (f1 circuit Noida).even though it was his first time driving a race car without any prior training ,he performed well and hit good lap times.The driver coach there suggested him to participate in the driver selection program for the Volkswagen Vento R Cup 2015 which was held at ‘Indy karting’Pune. “I didn’t have any experience in karts so I took basic and intermediate course at Rayo racing academy under the supervision of Rayomand Bannajee,” he adds.(eight times national rotax champion and the driver coach of Volkswagen Motorsports India).

Among more than 60 participants 12 would be selected and he was selected among the top six drivers. So as one of the new drivers in the Vento r cup 2015 he was really excited and nervous. “My first race was held at kari motor speedway Coimbatore which is a tight circuit measuring 2.1km Nervous and sweating under the helmet,I managed to finish 14th out of 22 drivers, even after having a incident in the first lap itself which happened to damage my car badly,” he remarks.

During the second round and onwards his qualifying times were good but during the race,I faced many racing incidents and technical failures which was unavoidable,and so after the third round in Buddh international circuit his sponsor could not bare my damage expenses. He couldn’t compete in the fourth round and complete the championship.

In 2016, he was one of national racing drivers hired to drive and test the new Tata cars like the Bolt,Tiago,and Zest to hit the non stop 50000 km world record at the vehicle research and development establishment,Ahmednagar,Maharashtra

As of now he has not been able to enter any racing series due to lack of sponsor ,but still hope to be back on the track in the near future. “I am also starting a racing simulation centre back here in Gangtok where the interested can enjoy the thrill of wheel -to-wheel racing with other drivers in a safe environment, and even learn the basics of racing as well as driving for learners,” he says

Since motorsport thrives in high expense to start with ,it is considered unaffordable and almost impossible to achieve what one dreams. Here is the challenge. But once you prove yourself in the circuit and win a championship in any racing series, your entire expenses for the next championship will be funded by the organisers.

“We do not have any platform for racing in Sikkim and providing a race track in the state seems impossible now but what we can do for a start, is by starting a go-cart track if one is really interested establishing one. Drivers can get some track time in it. We could also host racing championships and invite drivers from all over India to participate,” he further adds.

2016- One of the drivers for ‘Tata Geared Great Challenge’ (50000 km non-stop world record) While the courage to pursue passion can have a cost, financial or otherwise but that doesn’t stop him from exploring new avenues and make a mark in a unique way. 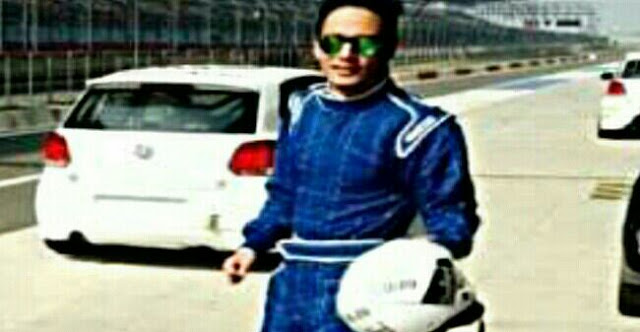