The hills have done what the plains have failed to achieve — a ban on smoking in public. While the prohibition has been in force since 2003, not a single district has been able to achieve the feat so far. Four districts, however, have taken an initiative to prevent smokers from lighting up indiscriminately.

The district administration declared Darjeeling district as the first smoke free district of West Bengal. The famous mall has been a smoking-free zone for a few years now. In Kolkata, not a single conviction has happened so far. Since smoking was banned in public places, the Darjeeling district administration has penalized 105 people found for violating the law that came into effect in the three hills sub-divisions from August 15, 2016.

Officials of the district administration expressed satisfaction with the progress and also cooperation of the hills citizens. "Since we started the ban, we have got positive response from the people. Of course there will be cases when someone will not heed the law. But, we are trying to deal with it in the best possible way. So far 105 people have been fined Rs.200 each for violating the ban on smoking in public places," said Anurag Srivastava, the Darjeeling DM.

The declaration as made on the basis of a third party assessment conducted by MANT - an NGO - from January 17 to 21, based on the guidelines developed by Johns Hopkins University, the International Union against Tuberculosis and Lung Disease and the Center for Tobacco Free Kids of the United States of America.

Given the enormity of implementing the law, the district administration has mooted the idea of adoption of areas by different social organizations, NGOs and schools. "We (administration) cannot be everywhere. Therefore, we are in talks with various schools, and social organizations to convince them to adopt areas of their choice where they will create awareness and also convince people the dangers of smoking," said Srivastava.

While this was the right approach, the stress should be on smoking in public, felt Nirmalya Mukherjee, director, MANT. "A blanket ban is neither possible nor has the desired effect. Make tobacco scarce and ban use in public.

Darjeeling has done that effectively and it's time to take a leaf out of its book," said Mukherjee. He added that four other districts were ready to enforce the ban."West Bengal has one of the largest smoking population among the states. As much as 36.3% of the state population uses tobacco. The state government spends Rs 3,440 to tackle tobacco-related health issues. It's time to press the panic button," said Mukherjee.

Even though Darjeeling has banished smoking in public, the queen of hills is yet to prohibit sale of tobacco products near school, college and government office premises, he pointed out. "This is a serious issue since it's been observed that most take to smoking at the age of 17 years when they are still in school or college. According to a study, if you can prevent a youngster from getting hooked to cigarettes at 17, his chances of taking to the addiction later will be 84% less."
TOI 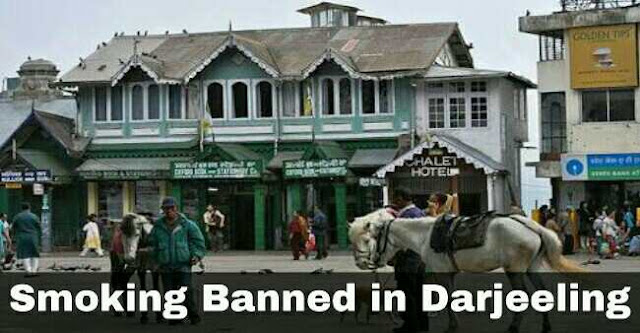