A team of cyber experts of Kolkata police have travelled to Siliguri and are in the process of tracking Juhee Chowdhury by trying to locate her handset.

West Bengal Crime Investigation Department (CID) has laid a network of cyber traps to nab BJP Mahila Morcha general secretary Juhee Chowdhury, who is absconding since her name got involved in the Jalpaiguri child trafficking racket.

Finding it difficult to detect fake versus genuine sales visits? Medisafe, a small business, did this instantly! Watch now.

A team of cyber experts of Kolkata police have travelled to Siliguri and are in the process of tracking Juhee Chowdhury by trying to locate her handset. The BJP leader's mobile phone is switched off. "We doubt that she may be in Delhi or Kolkata. We may arrest her as soon as she is located," the official added. Juhee's location may be located if she now makes calls from her handset.

Meanwhile, BJP Mahila Morcha President and Rajya Sabha MP Rupa Ganguly has supported Juhee's hide-and-seek. "I feel Juhee is doing the right thing. She is a young woman who got scared by the way the CID treats the accused. Had she been of my age she would have faced interrogation," she said. However, the 'Draupadi' of Mahabharat fame clarified that she did not have a word with the accused BJP leader.

However, minister of state for heavy industries and Asansol MP Babul Supriyo said that it was illegal to flee from CID interrogation when the investigating agency found her accused in the case. "I don't support her (Juhee's) hiding. She should come overground, face the interrogation and prove herself innocent," he told media. 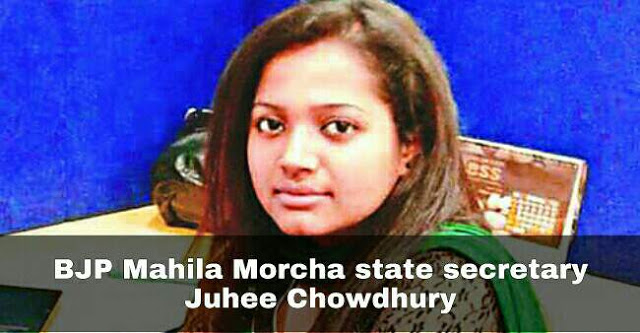 posts. I just added you to my Google News Reader. You can

Keep up the great work Look forward to reading more from