When the Left Front government was swept out of power in 2011, they left a total debt of Rs 1.93 lakh crore behind. When Mamata Banerjee’s finance minister Amit Mitra presented the budget on Friday, it was quite clear that the Trinamool Congress government will double that figure by the end of 2019 – a mere eight years after taking charge.

Mitra projected that the total debt will balloon to Rs 3.66 lakh crore in 2017-18, or 1.9 times the amount that Asim Dasgupta, who presented 25 consecutive budgets, left behind. Doubling it will be only a small step away.

A quick scan of the figures reveal quite a fiscal horror story.

It appears worse from another perspective – the debt repayment amount will consume 81% of the state’s tax revenues next year.

“You will be shocked to learn about the debt burden. In 2016-17, the total burden for principal repayment and interest would be of the tune of Rs 40,000 crores. In 2017-18 this would increase to more than Rs 47,000 crore,” said Mitra in his budget speech. (He actually raised the projections he laid down in Budget At A Glance!)

The situation is laced with irony as both the chief minister and finance minister constantly rails against the death trap (read debt trap) that they inherited from the previous government.

“There was no stable government after Rajiv Gandhi at the Centre. The Left Front took advantage of this and had its way in borrowing from the market. We are paying for that now. I suggested to the Centre that it should set up a debt restructuring commission to come up with a solution,” said the chief minister on Friday after the budget.

While politicians may keep debating why she uncorked a series of populist expenditures that kept adding to the burden, one can take a look at the ominous portent these figures have for her government.

The amount the government will spend in the next year under four heads such as loan repayment, salaries, pension and subsidies amount to a staggering Rs 1.06 lakh crore which is almost double of its tax revenue Rs 55,786 crore. The implications are simple – every rupee that she spends on development work and populist measures, the chief minister has to depend on someone else.

For 2016-17 the state faced a staggering total debt of Rs 3.34 lakh crore. The projected expenditure under the four heads loan repayment, salaries, pension and subsidies stood at Rs 94,256 crore. The tax revenue was at Rs 50,773 crore.

There were political noises around the debt menace during the day. “The government has raised Rs 1.45 lakh crore of debt in the six years. The chief minister has got no right to criticise, and highlight, the debt figures,” said CPI(M) MLA Sujan Chakraborty who is also the leader of the Left Front in the Assembly.

Since she came in power, the Trinamool chief has been crying hoarse over the need for a fiscal relief package from the Centre. She kept lobbying for it when the UPA II was in power and kept up the demand when the Narendra Modi government replaced it. But clearly after her repeated pleas were turned down citing no provision in the Constitution to single out a state for such relief, none has any idea how to avoid a fiscal doomsday. 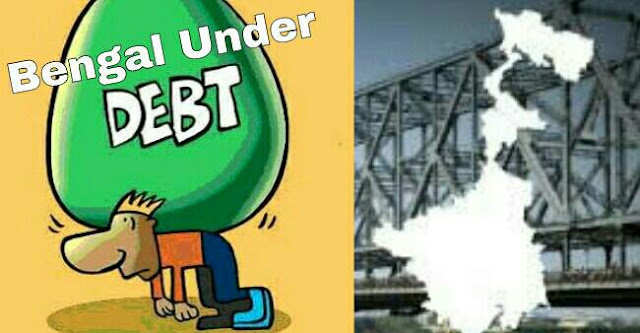