Another person was arrested on charge of selling 17 children in Jalpaiguri district on Sunday taking the total number of arrests in the case to 2.

A senior police officr said Sonali Mondal (inset in featured image), Chief Adoption Officer of an NGO was arrested by CID sleuths accompanied by local police from Falakata earlier in the day.

Yesterday Chandana Chakraborty, the Chairperson of the said NGO 'Bimala Sishu Griho' was arrested by a seven-member CID team from the NGO's office in Falakata area of the district.

The two were produced in a district court today and given 13 day's remand in CID custody.

The two were accused of selling 17 children, in the age group of 1-14 years, to a racket at high price in past few months while flaunting the facade of helping needy couples to adopt babies.

The officer did not disclose where the children were at present but said the NGO was under radar for several months.

Earlier CID blew off the lid of a child trafficking racket conducting raids in North 24 Parganas, Kolkata and some other parts of south Bengal since November last year. 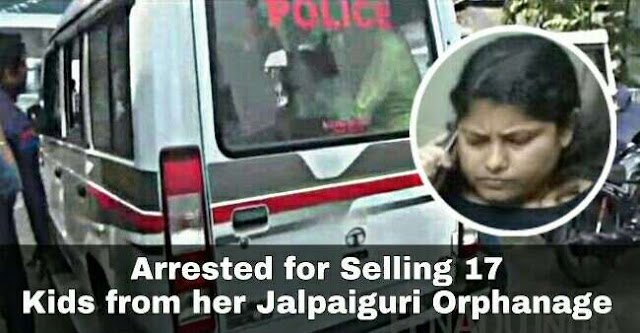