Till death do us part - Friends enjoying, drinking, over-speeding, all gone to Gods home

Four youths, including two girls, died in a horrifying road accident between Birmi and Issewal villages on South City road, about 10km in Punjab, around 1.15pm . One youth is admitted to the emergency ward of a private hospital in Civil Lines, sources say won't survive.

The deceased have been identified as Sanyam Arora, 20, Gaurish Verma, 21, Rishika Bassi, 19, and Ishani Jindal, 19, while the injured is Akshit Grover, 21.

They were former schoolmates studying in different colleges of Ludhiana, Mandi Gobindgarh and Delhi. They had gone for a drive in a white Honda City car. Eyewitnesses said around 1pm, they took beer from a liquor shop near Birmi bridge of Sidhwan Canal, danced there and moved towards Ireo Waterfront, a housing society , in South City .

Des Raj, owner of a dhaba opposite the liquor shop, said, "We saw the youngsters enjoying drinks and dancing outside the vend. Some people objected to it and asked them to leave the spot.Thereafter, they moved towards Ireo."

The accident site presented a ghastly picture. The car, allegedly running at 100kmph, was split into two after ramming into a eucalyptus tree. The kerbs were broken and even the tree had fall en down. Blood and flesh were splattered on the tree up to the height of 20 feet.The youngsters had posted their last video on a social networking site a few min utes before the accident, wherein they were all enjoy ing music and singing in side the car.

Gaurish Verma, a BTech third-year student, was driving the car he had recently purchased. Ishani was sitting on the passenger seat, and Sanyam, Rishika and Akshit were on the rear seat. Inquiry officer assistant sub-inspector Janak Raj from Mullanpur police station said, "The condition of the car indicates high speed. However, it will be too early to say anything." 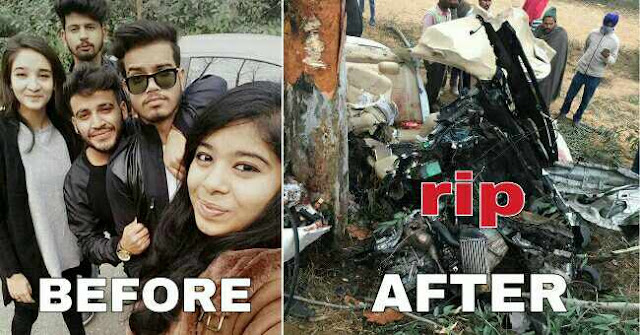