Unlike most of us his days always begun with the disturbing pitch of his cellphone's alarm at 5 AM. He wanted to sleep more, he wanted to turn over few times and cuddle inside his warm blankets and live in it feeling heavenly few more minutes, few more seconds but No! He had a dream, he had responsibilities and he had to fulfil it no matter how loving the mattress and the blanket seemed.

He lived in a rented apartment in Salbari about 25 minutes walk away from the town with two of his friends. He came to Siliguri far from his family to work on his dream, taking small steps each day nearer to it. He had started to work in Salbari Himalayan Gym as a trainer. This job was a gift from his trainer Mr. Jairaj Pradhan, the co-owner of the gym, a young tall muscular man, a certified trainer and a bodybuilder himself. It was under this gentleman's care he go into to fitness, definitely a building block to his dream, the dream to be an actor.

Every morning he woke up early sacrificing his sleep, walked those dusty roads, opened the gym at 6:30 AM, set in order the place and waited as members came in until at 10 AM he closed it. Again in the evening from 4:30 PM to 9 PM he would be there rendering services to all. While his friends were busy going around the town, drinking, watching movies, enjoying dinner he had to crumble his heart and say No, not because he didn't want to but because his dream was more important than those delicacies.

He attended each one in the gym, giving them the encouragement for the day. Each day he would chant positive words into their ears and he did this in such humble note that they use to listen him with their hearts more and that is why they loved him.

He would often say, "come on!, you can do it", "today you did better than yesterday", with a smile on his face he would go to each one and lightly lift the bars for them and say in his most encouraging tone, his favourite line, "The last one", and they would cry out in agony but filled with his hope in them they would give their last best push.

When it came to his turn to workout and for his dream and life itself he was always on his own. He too needed someone, a voice in the ears that would encourage, the voice that would whisper, "the last one".

There were many in the gym to talk to but none so deep to share moments. Everyone one would come, say their hi's, shake their hands, do their exercises and leave. One by one each one would leave until he would be left alone. Everyday he would hope if there there was someone who would be there to be with him to share moments, encourage him and support him.

He would look at the mirror and smile but only he knew the huge burden beneath that smile. The burden of becoming someone, the burden of fulfilling his dreams, the burden of not being in a real earning job, the burden of family's hope in him. Many came into his life as friends, brothers, family even as soul mates but none stood with him in his dreams. They left him because as time clocked their hope in him diminished and promises were broken and they excused away. But no matter how lonely was he, how uncounted he felt he was determined to get to his goals and it was not to prove to anyone but to prove to himself, to justify his inner self, to one fine day be able to look at himself in the mirror and say, "yes I did it, I didn't give up".

But may be this time was giving him a break, it was evening session, the gym was half full with boys and girls puffing and grunting on their weights. Loud rock metal music on the protein supplement shelf at the corner of the gym was blaring and he was as usual attending the house.

There was a knock on the brown wooden door but no one heard it, people where all busy burning their muscles and it took few slaps on the door with her palm until she had gained everyone's attention. There stood on the green foot mat at the door girl so pretty probably no one in the gym has seen before. She wore a wide pretty smile with a dimple on her right cheek. She was in her black sweat pants and grey jumper, she had dyed her hair golden and had it pony tailed. She was probably 5 feet 6 inches.

As they stared at her everyone in the gym stood dead still, even the loud metal rock turned to a slow soft romantic music in their ears and all they could hear was her soft sweet voice with her beautiful eyelashes beating in slow motion, "may I know who is the trainer in here? I would like to speak to him". Like she knew whom she had to look she looked directly at him, and like he knew she would be coming too looked directly at her his legs involuntarily took him toward her. Half lost in the new rhythm of the music playing in his head, he replied, "it's me, Milan here, Nice to meet you", and stretched out his muscular hand for the shake. She too offered her soft little hands and as they shook they talked over her admission while the rest of the members occasionally stared at them directly and few in the reflection in that big mirror right next to the gym door. The whole gym seemed like they had their fingers crossed over her admission.

After she left there was an odd silence in everyone's eye though there was loud music thundering. Everyone wanted to know what they talked, everyone wanted to ask, he could see those questions painted in their faces but the only answer he could give was a smile and went back to assist the boy at the inclined bench press. All the while he was still holding that smile in his face, he didn't know whether it was love at first sight (because it was not just about her looks but her voice it was so loving and soothing ) or just a feeling of talking to someone so warm, only time could tell that but then he sure did felt good.

He held the bar for the boy, counted his regular four sets and lost in her charm he stared at the blue carpet like a fool, smiled and said it this time with a deeper purity in his voice, "the last one".

P.S thanks to Mr. Jairaj Pradhan and Mr. Milan  for letting me visit the gym and write this story. 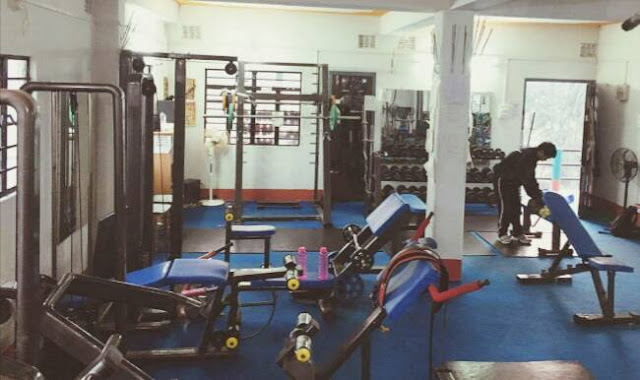 pilatesequipment said…
I always check this type of advisory post and I found your article which is related to my interest. This is a great way to increase knowledge for us. Thanks for sharing an article like this. pilates reformer machines
13 October 2021 at 22:23

dynamofitness said…
You've written a very useful article about Bench Press Sydney. This article provided me with some useful knowledge. Thank you for providing this information. Keep up the good work.

Strong Fitness Performance & Ninja said…
I am grateful that I was able to learn something useful from this article. After reading it, I believe you possess excellent expertise. Thank you for sharing about gyms in dallas texas. Keep up the good work.

vitalhealthlife said…
It is truly a well-researched content and excellent wording. I got so engaged in this material that I couldn’t wait to read. I am impressed with your work and skill. Thanks. Read more info about fitness coach Ottawa
11 January 2022 at 13:05

gym51 said…
I liked your work and, as a result, the manner you presented this content about singapore gym equipment.It is a valuable paper for us. Thank you for sharing this blog with us.
12 February 2022 at 06:39