Siliguri mayor Asok Bhattacharya yesterday said he would write to the Union civil aviation ministry and the state government, requesting them to keep aside politics and work together for infrastructure expansion of Bagdogra airport.

The assertion from Bhattacharya, who is the CPM MLA from Siliguri, came day after The Telegraph reported how the expansion plan of Bagdogra, which is the need of the hour vis-à-vis the steady rise in number of passengers and flights every fiscal, would come to a halt as the state government has decided not to provide land, required for such expansion, free of cost to the Centre.

A senior official posted in Nabanna, while mentioning that the state would resort to "total non-cooperation" with the Centre, had said the government would tell the Union civil aviation ministry that the land required for the expansion of the airport - around 118 acres - would be provided only if the Centre allots funds, necessary to acquire such land, to the state.

The Union civil aviation ministry has sought the land free of cost.

"There might be difference of opinion among two political parties over several issues, including demonetisation, but that should not come in the way of development of the state. Figures provided by the Airports Authority of India (AAI) with regard to Bagdogra airport clearly show that infrastructure at the airport needs to be expanded immediately. I also move through Bagdogra and find that the terminal building becomes too congested during rush hours," the mayor said yesterday.

"Now if the state takes such a decision (of not providing land to the Centre free of cost), it would be a major setback for the airport and eventually affect the growth of north Bengal. I will write to the Union civil aviation ministry and the authorities concerned in the state," he said.

The AAI has made elaborate plans for the expansion of Bagdogra and wants to build a new terminal, aircraft parking space, hangars, more aprons or parking bays and a multi-storied parking lot.

Keeping in mind the growth of Bagdogra - it is the cheapest airport for plane refuelling as the state has waived the surcharge on Aviation Turbine Fuel (ATF) - the AAI has decided to spend around Rs 1,500 crore to execute the expansion.

"The sole issue that holds us back from implementing the plan is the shortage of land. We have spoken to state officials and asked for the land. Although we need around 118 acres, state officials have said that they cannot provide so much land at one go. We are ready to scale down the project as it appears that 50 acres would be available now," AAI chairman G.P. Mohapatra had said during a visit here last month.

Now, the chance of getting even 50 acre seems bleak as the state is not ready to provide land for free to the Centre under the National Civil Aviation Policy of 2016.

This is what has made the Siliguri MLA react.

"When the Left Front was in power, we had provided land to the AAI free of cost for construction of the road that connects the airport with NH31. Infrastructure development always has a positive impact on the local and regional economy. We had differences with the Centre on many issues but we never made any such decision which could affect development process," Bhattacharya, a former state minister of urban development and municipal affairs, said.

"If the Trinamul government does not change its decision and the infrastructure development at the Bagdogra airport continues to suffer, our party will launch a movement against the state. We will also demand that the Centre speak to the state on this issue," the mayor, who is also a CPM state secretariat member, said. 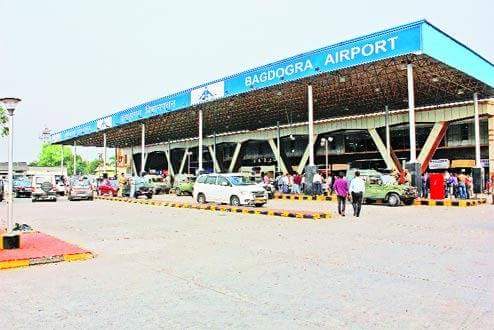