A tiger was seen in Kalimpong's Neora Valley National Park on Thursday morning, the principal chief conservator of forests of the state has said.

Sightings of the big cat in north Bengal are rare.

Pradeep Vyas said that a driver on his way from Pedong to Lava spotted the tiger inside the national park around 7am and photographed it. The driver, Anmol Chhetri, alerted the forest department after taking the photograph.

Vyas said a 2014 census by the Wildlife Institute of India reported only three tigers in north Bengal. The figure was based on pugmarks and other indirect evidence. No tiger was seen.

The last time a tiger was seen by humans in north Bengal was a dead big cat near railway tracks in Cooch Behar in 2007 that had been killed by a moving train.

In Neora today, officers of the forest department, including range officer Sujata Gurung, reached the spot after Chhetri's alert and found pugmarks, excreta as well as a half-eaten cow, which were signs of the tiger's presence there.

Both Pedong and Lava are in Kalimpong. Pedong is at an elevation of 4,070ft while Lava's elevation is 7,016ft. Neora Valley National Park can be reached from Lava.

The park covers an area of 88sqkm and extends to Sikkim and Bhutan.

A wildlife expert who was involved in a tiger censuses in the Sunderbans said the tiger may have come from Bhutan, since tigers are known to travel long distances.

In June 2007, a train had mowed down a tiger in Cooch Behar at a spot that was 16km from the Jaldapara National Park.

In June 2012, the Buxa tiger reserve authorities said they had spotted a tiger five times in an area of the forest, raising hopes that a tiger would finally be seen in the wild but the big cat eluded humans then.

A tiger census conducted in the Sunderbans last year reported 86 tigers in South 24-Parganas. Out of these 86 tigers, 60 were found in the tiger reserve in Sunderbans and the rest in contiguous forest area. 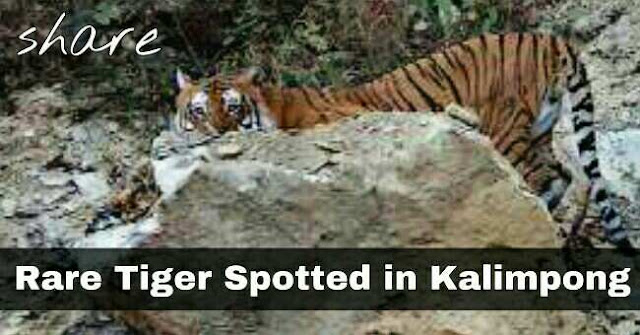