Karimul Haque, a tea garden worker in his early 50s, on his bike, has become the only lifeline for 20 villages in and around Dooars.

Today the government announced names of 120 people to be given Padma awards and luckily the life savior messiah Karimul da's name was too there. Such a proud moment for us it is today. ILoveSiliguri spoke with Karimul da just a while ago and congratulated him. He was overwhelmed with joy.

Padma Shri is the fourth highest civilian award in the Republic of India, after the Bharat Ratna, the Padma Vibhushan and the Padma Bhushan. Awarded by the Government of India, it is announced every year on India's Republic Day.

This was the first time ILS spoke with him. Though he recognised ILoveSiliguri but didn't know about its Facebook page. He says he is uneducated so doesn't know how to use it. Sir you may not be educated but what you have done, no one has even thought about it. You are a person sent by God.

Yesterday we had posted about him and today he gets Padma Shree, we are just loving it.

We had posted several times about Karimul da in the past and one of our posts had gone viral too with over Million likes and shares, shared by all major social media pages.

About our Ambulance Dada

“Besides, a bike ambulance will be of more help in these narrow lanes and by-lanes, where four-wheelers get stuck every now and then,” he signed off 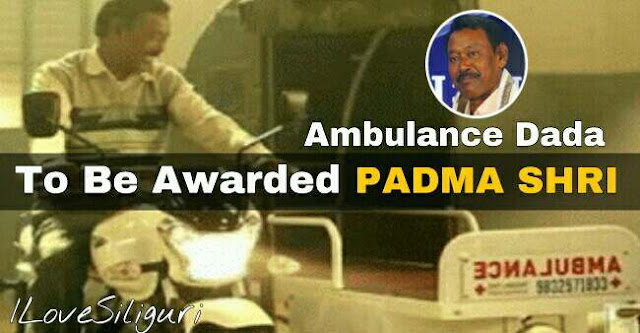