Sushma Swaraj took to Twitter to ask the regional passport office in Calcutta to expedite the setting up of the Passport Seva Laghu Kendra in Siliguri, which had been announced two years ago.

The centre is expected to benefit the residents of north Bengal who now travel either to Calcutta or Behrampore or Gangtok in Sikkim for passport-related work.

Darjeeling MP S.S. Ahluwalia had been keenly pursing the matter and the start of the centre, where all passport-related works other than issuing the document will be taken up, is expected to help the BJP and its ally Gorkha Janmukti Morcha.

The external affairs minister tweeted: "@rpoKolkata Please expedite the construction of PSK in Siliguri. This announcement was made two years ago."

A lot of people in north Bengal had been constantly tweeting to the minister and other authorities enquiring about the date of the centre's opening.

In September 2014, in response to a letter from Ahluwalia, Sushma had written: "I am happy to inform you that the ministry has decided to establish a new PSK in Siliguri. The ministry is in touch with the chief secretary of the government of West Bengal for allotment of a suitable site for the PSK. We will keep you informed of the progress.

Sources said the Passport Seva Laghu Kendra in Siliguri was coming up at a commercial building owned by the Siliguri Jalpaiguri Development Authority at Himanchal Bihar in Matigara. A portion of the two-storied building, measuring around 4.327sqft, has been rented out to the external affairs ministry for opening the centre.

After the site was chosen, it was decided that the ministry would pay Rs 72,322 as rent to the SJDA a month. The ministry also assigned the SJDA the task of carrying out interior work of the centre and agreed to pay the agency Rs 93 lakh. Work started and on December 19 last year, state tourism minister Gautam Deb paid a visit to check out the progress of the work.

"The interior of the centre is nearing completion. We hope it could be handed over to external affairs ministry latest by January 31 next year," Deb had said after his visit. "We also hope that the ministry will immediately open the centre."

A senior official of the SJDA reconfirmed that work was in full swing and would be completed by January 31.

B.B. Kumar, the regional passport officer of Calcutta, said the centre was expected to be functional by the first week of March.

"We have taken up the task of opening the Passport Seva Laghu Kendra as soon as possible. Almost 90 per cent of the work has been done. Some more machines need to be installed. After that, there will be an inspection. We hope the centre will be operational by the first week of March," Kumar told The Telegraph over the phone.

Another official in the Calcutta passport office said: "The wiring at the Siliguri centre was faulty and it had to be redone. Now, a communication tower is being set up there." 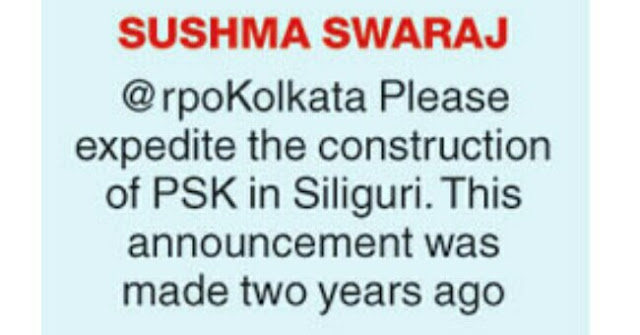