Work on several stretches of the two Asian Highways that will pass through the region has halted for around three months as the Centre has not yet approved the revised cost estimates of the projects.

The estimates prepared by the project directors of the highways had been sent to the Union surface transport ministry in November last year.

"After the work started on AH2 and AH48, certain changes were made in the plan for some stretches. Accordingly, fresh estimates were sent to the Centre. Some clarifications were sought from us and we communicated back. Later, we were told that the maximum additional cost that could be approved should not be more than 20 per cent of the original estimate. Otherwise, a fresh proposal would have to be cleared by the Cabinet Committee on Economic Affairs of the Centre," Nirmal Mondal, project director of AH2, said today.

Some additional work according to the revised plans include a vehicle underpass on AH2 and a four-lane road - instead of a two-lane road mentioned in the original plan - at Fulbari on the India-Bangladesh border.

For AH48, some alignment changes at places like Gayerkata, Birpara and Dhupguri - all in Alipurduar and Jalpaiguri districts - had been included in the revised plan.

Sources said the project implementation units had drawn up new estimates and the revised amount didn't cross the 20 per cent mark.

Asked if the Rs 284 crore would be enough to carry out the additional work, Mondal said: "It would somehow cover the cost. But we would be left with only a few lakhs as contingency funds."

"In terms of progress, 44 per cent work on AH2 is complete and around 39 per cent work on AH48 is over," an official said. "Unless the new estimates are approved, we cannot ask construction firms to start the additional work. As a whole, both the highway projects are getting delayed," he added.

The projects are being funded by the Asian Development Bank. 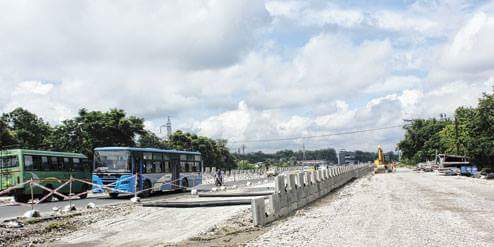