*His father, Nishikanta Basu, was a doctor from the village of Bardi in Dhaka District, East Bengal (now in Bangladesh), while his mother Hemalata Basu was a housewife.

*Basu's schooling started at Loreto School at Dharmatala, Kolkata, in 1920. It was there where his father shortened his name and he became Jyoti Basu. However he was moved to St. Xavier's School in 1925.

*He completed his undergraduate education and received honours in English from the Hindu.

*After completing his undergraduate studies in 1935, Basu set out for England for higher studies in Law. It is said that Basu attended lectures of Harold Laski in late 1930. It was in England that Basu was introduced to the activities of politics through the Communist Party of Great Britain.

*During his stay in England, he was actively associated with the India League and the Federation of Indian Students in England.

In England he was inspired by noted Communist Philosopher and prolific writer Rajani Palme Dutt.

*In 1940, he completed his studies and qualified as a Barrister at the Middle Temple. In the same year, he returned to India.

*In 1944, Basu became involved in trade union activities when CPI delegated him to work amongst the railway labourers. When B.N. Railway Workers Union and B.D. Rail Road Workers Union merged, Basu became the general secretary of the union.

*He was elected to the Bengal Legislative Assembly for the first time in 1946.

*After partition, he was a member of the Assembly but was arrested when the Communist Party of India was banned following a call for open revolt. He was released on the orders of the High Court and was a Legislative Assembly Member between 1952 and 1972. 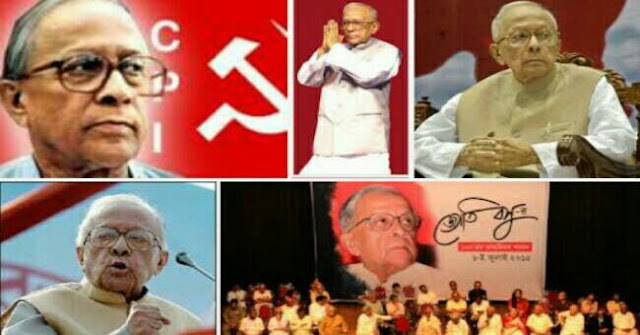