A clash broke between supporters of the Trinamul Chhatra Parishad and Akhil Bharatiya Vidyarthi Parishad during the submission of nominations for union polls in Birpara College today, triggering separate road blockades by both the outfits.

Birpara BJP MLA Manoj Tigga's car was damaged by alleged TMCP activists and he had to take shelter in a house to escape the attack. Twenty-seven people belonging to both the TMCP and the ABVP were injured in the violence.

Tigga had reached the college around noon today, along with ABVP supporters and candidates, to submit nominations for students' union elections.

"TMCP supporters stopped the ABVP team from entering the campus and an altercation ensued between them.

A TMCP worker was injured and within half-an-hour, more members of Trinamul's student wing reached with sticks and iron rods," said a police source.

Both the groups pelted stones with each other. Tigga didn't enter the campus and was keeping a watch on the situation from a distance of 200m from the college.

"A police force had already been posted on the campus apprehending troubles during submission of nominations.

The police tried to disperse the warring groups, but in vain," said a source.

Except one TMCP worker, all others were released after being administered first-aid.

Some TMCP activists ran towards the MLA during the clash, but he ran away and took shelter in a nearby house. They damaged Tigga's car.

The TMCP workers disrupted traffic on NH31C at Birpara Chowpathi from 1.30pm till 3pm when the police forced both the outfits to lift both the blockades.

Tigga said: "I did not enter the college and just went with ABVP candidates who wanted to submit nominations without any disturbance.

The situation in Birpara is different from other places in the state. Here, nobody will be able to prevent our candidates from nomination submission.

Elections should be held as per democratic norms. Senior Trinamul leaders illegally entered the college."

Sourav Chakroborty, the Alipurduar MLA as well as the district president of Trinamul, sought to counter Tigga's claim.

"Presence of the BJP MLA during submission of nomination is unfortunate and it is clear why he was there.

He went to the college with outsiders and attacked TMCP activists. Police should have taken stronger action during the clash," said Chakroborty.

In Calcutta, BJP general secretary Biswapriyo Roychowdhury said: "Bengal has gone back to the Emergency days of the 70's.

The Trinamul government is gagging the oppositions. Our tribal MLA Tigga was attacked today and his car was ransacked." 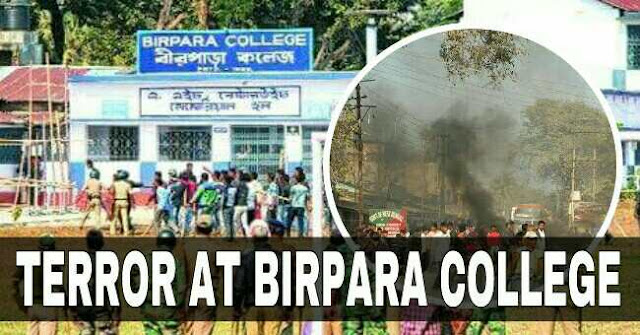